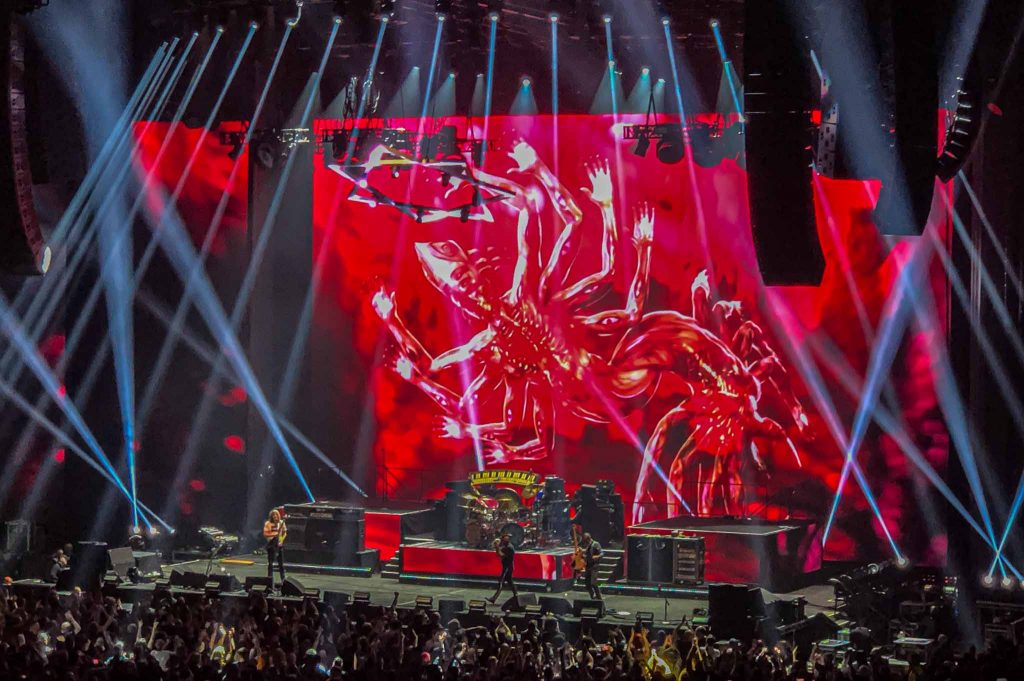 “CONGRATULATIONS, YOU DID GREAT”, SAID MAYNARD JAMES KEENAN, “WITH SOME EXCEPTIONS, YOU MAY TAKE OUT YOUR STUPID CELL PHONES”. THAT WAS THE SINGER’S COMMENTS TO THE CROWD AS THEY HAD RESISTED INTERACTING WITH THEIR PHONES ALL EVENING UNTIL THE LAST SONG.

Although the AO Arena was not completely sold out, there were very few seats left. TOOL is that kind of band that attract large numbers of fans to their concerts, especially when there’s many years between tours, unless you live in the USA where they have continued to perform live. TOOL fans are loyal, they are patient and as it turned out, obedient! The band’s request to respect their wishes and keep their phones in bags or pockets was, for the most part, obeyed. Why, well apart from just enjoying the show for what it is, the band have created a visual and aural show that demands attention.

There’s nothing left to chance when you watch a TOOL show, it is planned and executed in excruciating detail. That’s not a criticism, it’s an absolute pleasure to be immersed in the band’s vision of what they want you to experience – and what an experience it is! Most gig’s have a sound desk and a lighting desk, not TOOL, they have something resembling NASA Mission Control. For what is basically a four piece band, they make a huge soundscape that’s expanded even further by the use of the immense visuals.

When you have a band of the magnitude of TOOL, who can provide a creditable support? Killing Joke had supported their US tour a couple years back and had split opinion, some suggesting that TOOL should have been supporting their iconic friends however, TOOL, love them or hate them are now a stadium band. It’s almost impossible to imagine them play anything smaller than a venue that can hold less than 5-10,000 people.

So, tour support was Brass Against. If you’ve never heard of them, they’re a band that predominantly use brass instruments but also have live drums and guitar. Their material is rock based covers and they even played a couple TOOL songs. Normally, it would be poor judgement to play songs of the headline act but as they’re so diverse, it almost seemed fitting. It is however still odd hearing Rage Against the Machine and Led Zeppelin songs played on the tuba and trumpet, but the crowd showed their appreciation.

TOOL released the long awaited album Fear Inoculum after a 13 year gap. Their previous album 10,000 days would be hard to follow but the crowd were eager to hear it played live. With the notable exception of Grammy award winning 7empest, often quoted as being the best track on the album, the rest of the tracks were indeed all played in tonight’s show. The screen that is used to project the graphics onto was draped around the front of the circular stage to create a 3D effect for the opening part of the performance. The screens at the rear of the stage complimented the front screen and immersed the band within. Fear Inoculum opened the set to a huge roar. At over 10 minutes, the lengthy polyrhythmic progressive metal masterpiece was the ideal starter to what would be a mammoth performance from the progressive metal musicians. “Manchester, MANCHESTER!” shouted Keenan as he grabbed the crowd’s attention at the start of Opiate, one of the band’s earliest songs that has been re-recorded recently and referenced as Opiate2. This song demonstrates how far the band have come sonically as in contrast to the set opener, it has a more traditional alt-rock/grunge feel to it.

The band played songs from nearly all of their 6 studio albums with the exception of Undertow. Strangely, there were no songs from this seminal album which saw the band hit the mainstream. The Pot from 10,000 days got an immediate response from the crowd as they sang back to Keenan when he opened the song. As the hypnotically rhythmic bass intro kicked in, Justin Chancellor swayed back and forth like he was on another planet, transfixed and in a world of his own as he stood planted and rocked his upper body back and forth. The bearded bassist was sublime all evening as he rarely moved from his spot, stage left, until the last song where he swapped places with Adam Jones. Maynard James Keenan moved between two platforms at the rear of the stage, either side of the drums as he typically stays out of the limelight. During lengthy instrumental parts of the songs, Kennan would skulk, posture or even just crouch and almost disappear into the darkness. He has never been the archetypal frontman which is ironic as he is definitely not your average performer! None of the band members are particularly flamboyant as Adam Jones’s nonchalant style of guitar playing actually contrasts what you hear from his devilish playing. Jones talent isn’t limited to his playing as he is also the driving force behind the band’s visuals. Having declined film scholarships in his distant past, he chose to hone his guitar skills in the company of Tom Morello of Rage Against the Machine. Jones did develop his skills as a video maker by using stop motion camera effects in the famous music video’s for Schism and Prison Sexamongst many others. The visuals throughout the show were sublime. The mix of photography and video effects were pre-determined for each song and the colour schemes brought the music alive. Danny Carey’s drumming was another sight to behold. His drum riser blended into the set but his huge kit, which combines all manner of idiosyncratic sounds, is one of the focal points of the stage. Always well lit, Danny is an integral part of the band’s sound. The drums dominated at times, but the balance was usually addressed as each instrument had its moments. PushIt was there for the hard core fans to lap up and Pneuma followed for the newfound fans. Fear Inoculumwill no doubt have been the first album for many in the audience as lockdown had forced many to seek out new music. 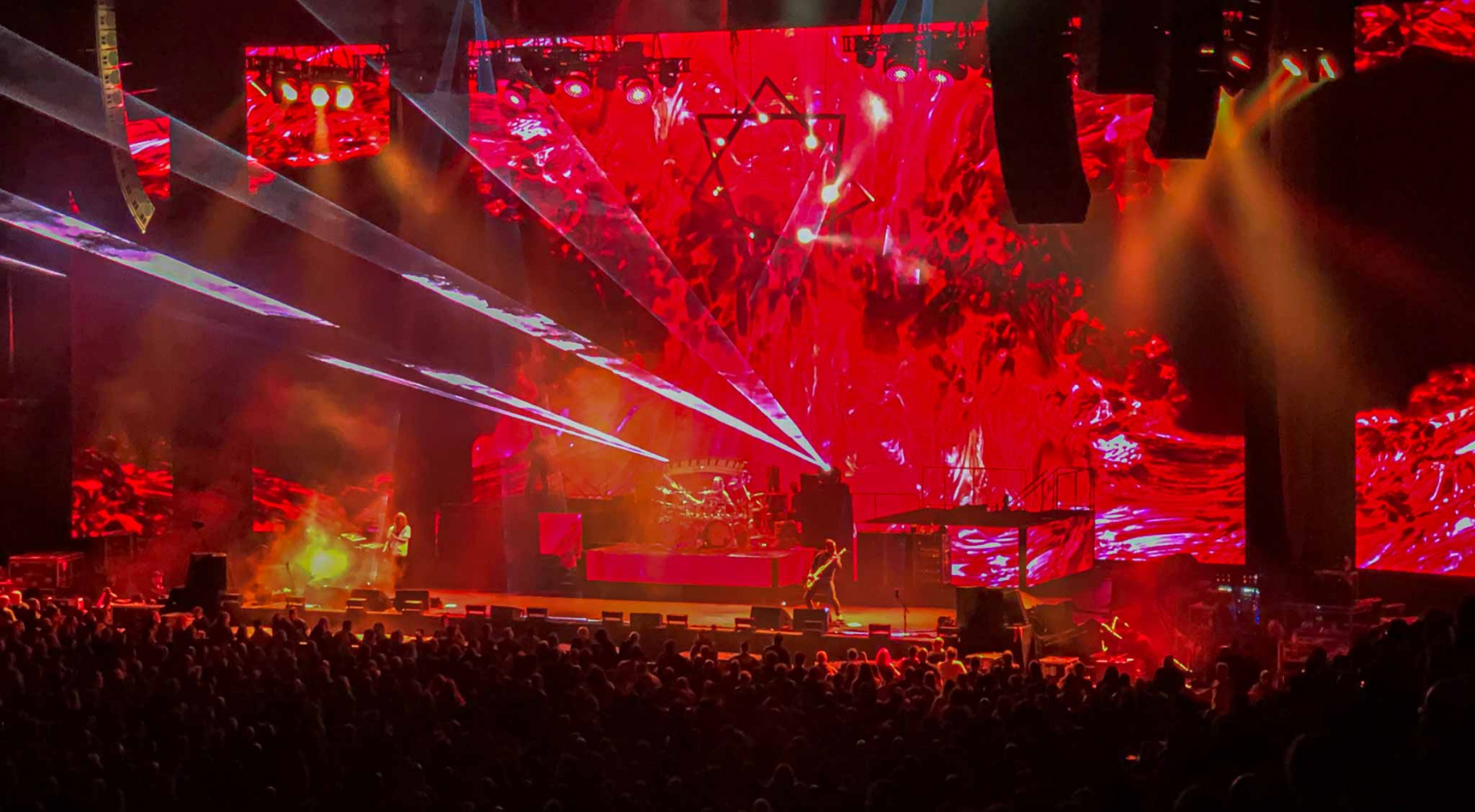 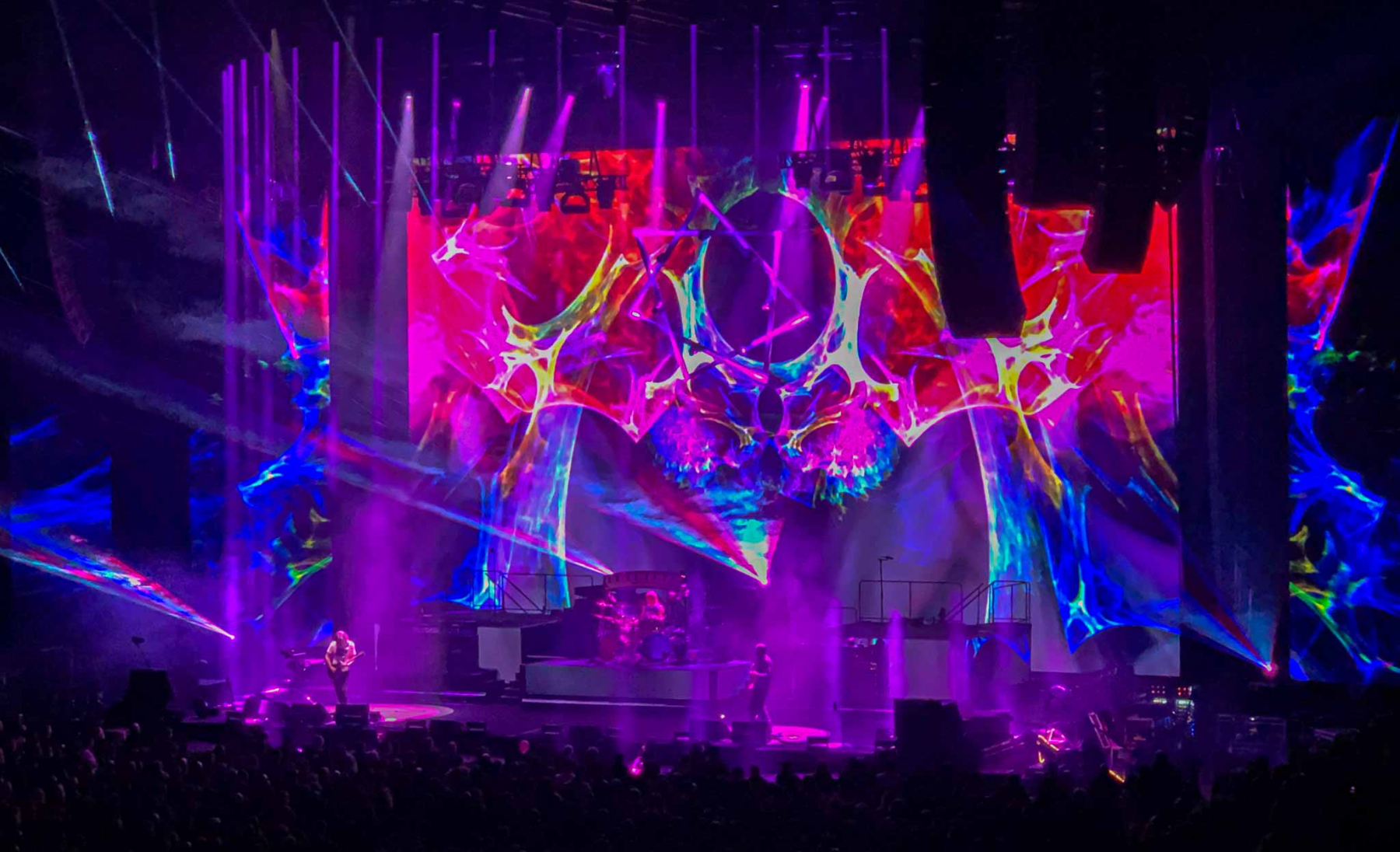 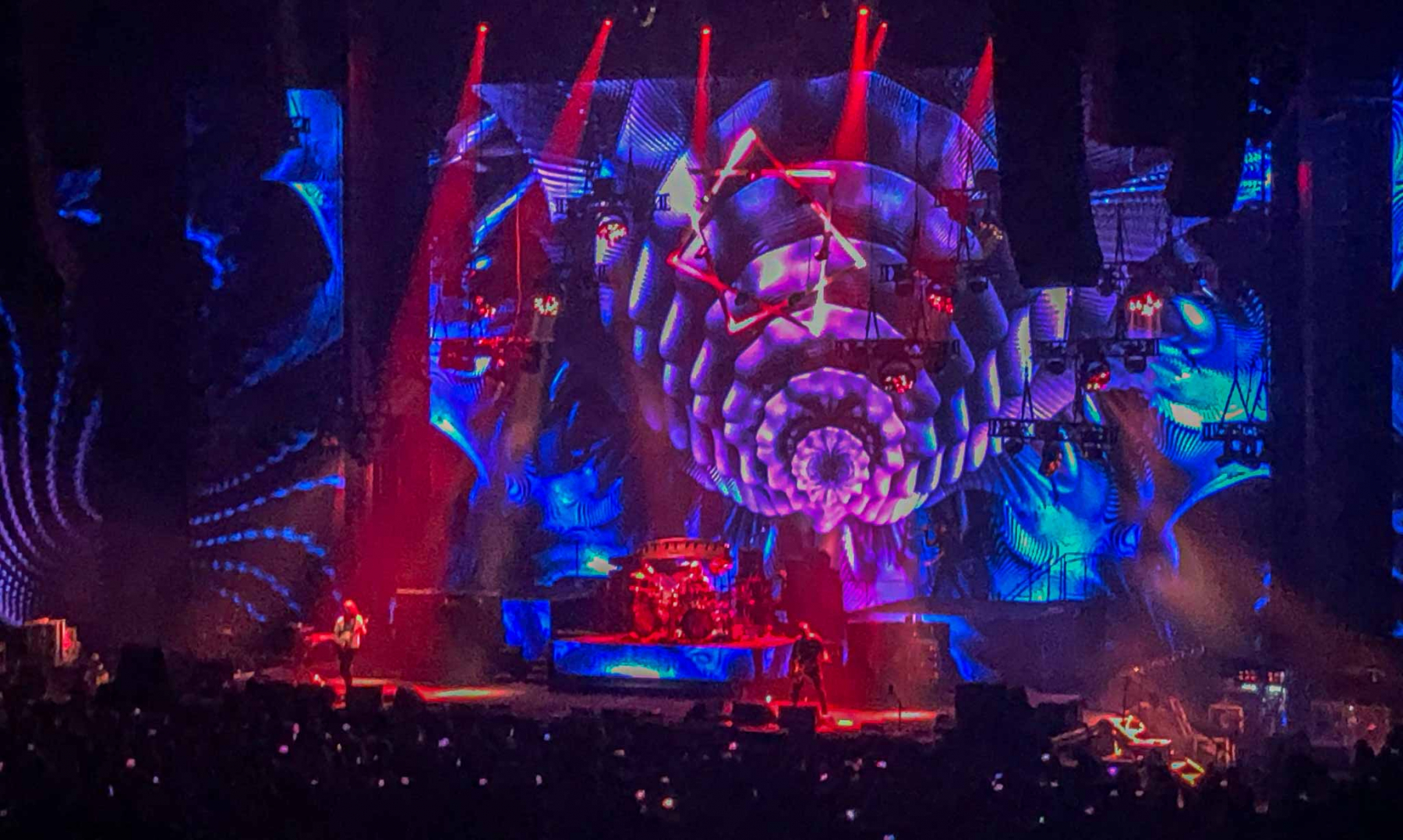 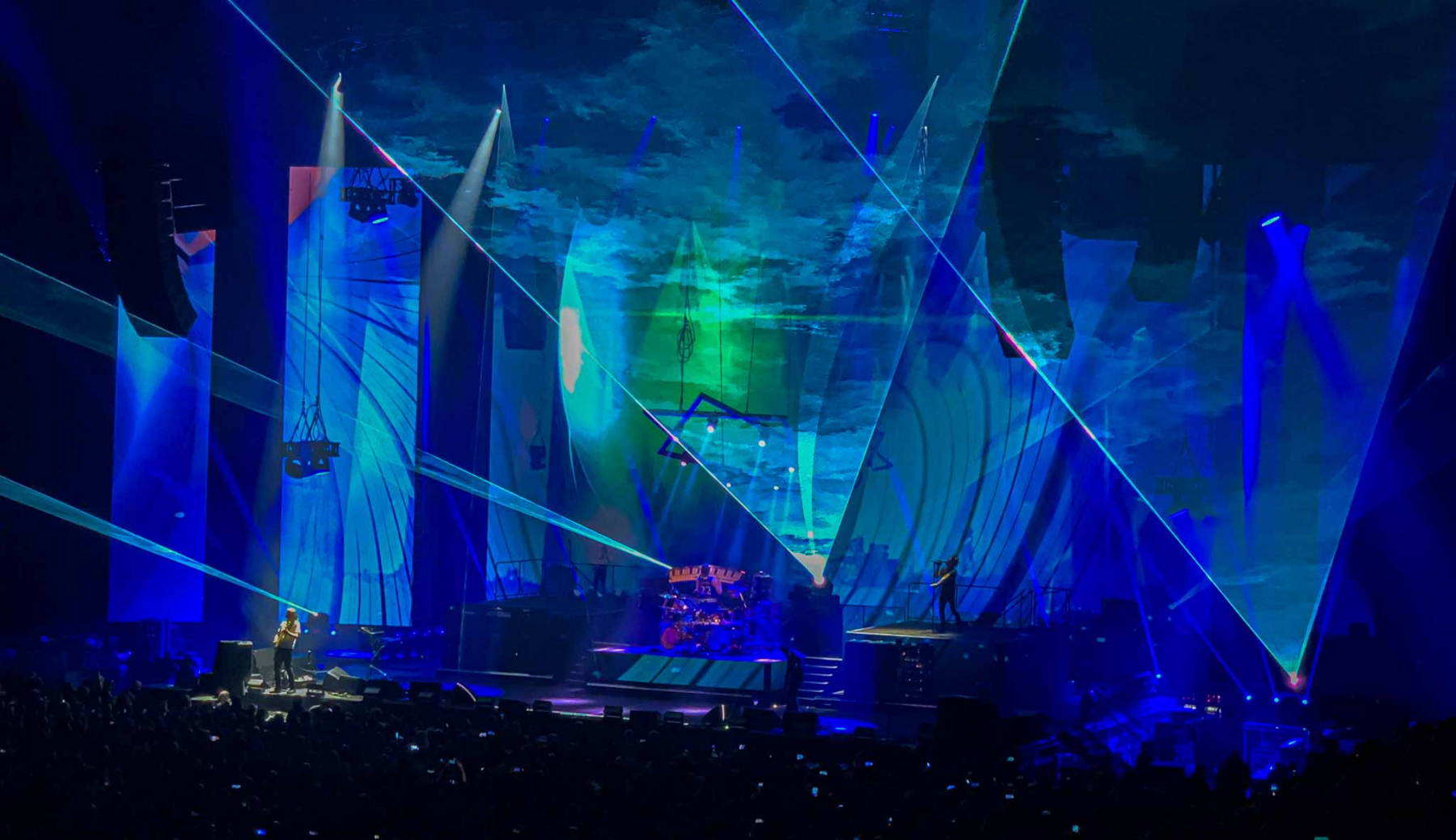 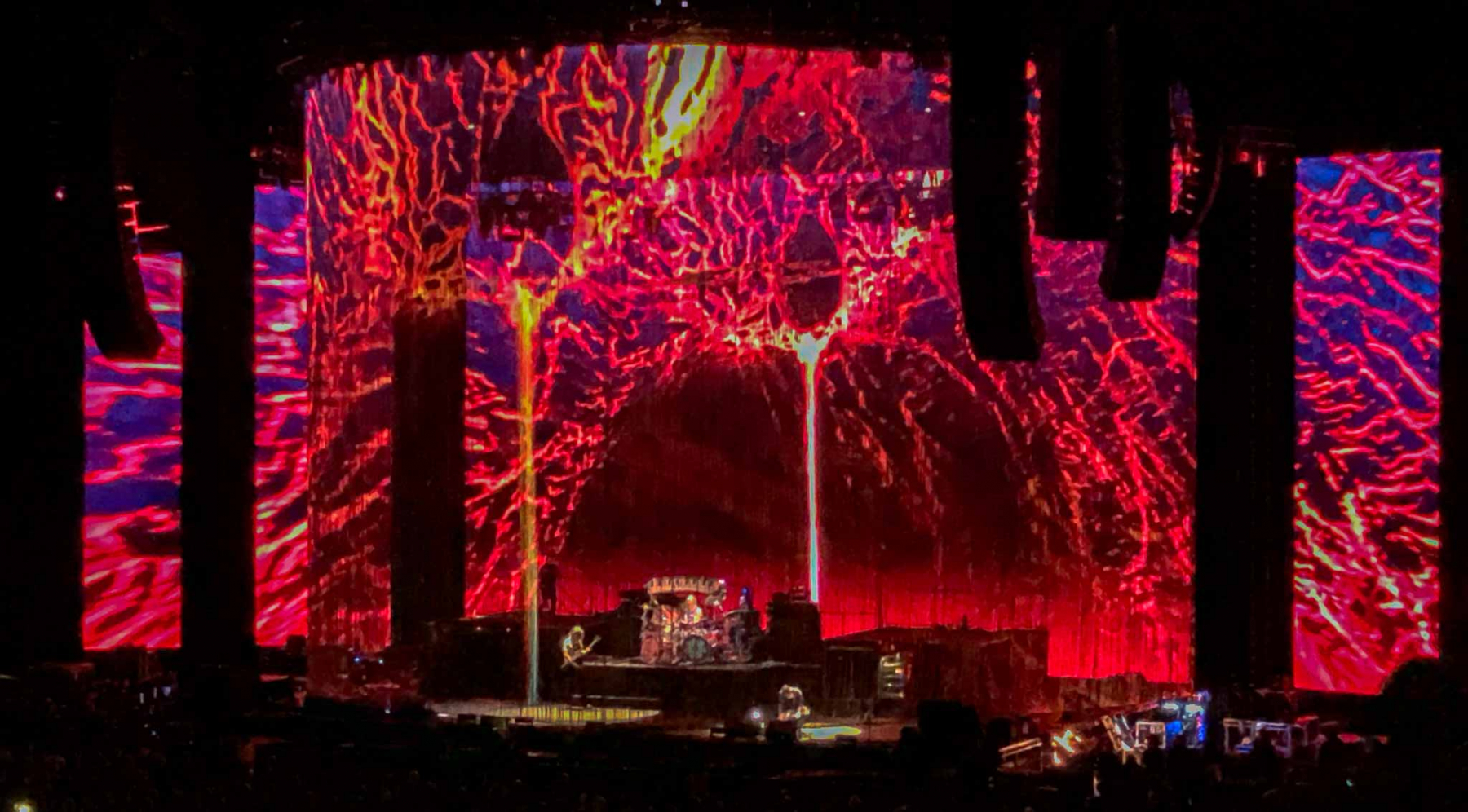 There was a trio of songs from Lateralus played mid-set. The first three songs of that iconic 2001 album were played in order which was highlight of the show for me. The Grudge is what TOOL are all about as each instrument showcased the dynamic range throughout the entire song as it changed from sparse empty moments to full on rage. Eon Blue Apocalypse is more an intro to The Patient which again, showed the band at their brilliant best. The main set drew to a close with Descending, another track from the new album and the chaotic Hooker with a Penis from Aenima.

After such a lengthy set, there was a much needed break for the audience to relieve themselves. Judging by the amount of official merchandise being worn, wallets were also being relieved. It’s much needed revenue for bands to recoup after the imposed lockdown and gives the chance for fans to revel in their purchases. It can’t be cheap to run a huge production like TOOL have and, in some ways, you get what you pay for.

After the 5 minute break, the band played an encore of three songs off Fear Inoculum. Danny Carey returned to the stage on his own and performed the curious Chocolate Chip Trip. Part drum solo, part electronic loop indulgence. Next, Culling Voices was a slow burner, for seven minutes the stripped back, ambient, and atmospheric song ambled along before it ended with a traditional thrash. I would much rather the afore mentioned 7empest was played as I prefer an encore to be a summation of a band’s back catalogue. It’s at this point Maynard addressed the audience and approved the use of phones to record their final song. Instantly, there were thousands of phones lit up the faces of the crowd as they desperately disengaged from the performance and re-united with their ultimately addictive arm extensions.

You can totally understand why TOOL try to enforce an policy of no phones and encourage their audience to immerse themselves in the now. Many of the crowd continued to marvel phoneless, but the inevitability always threatened as people want something tangible to hang onto other than the fading memory of the gig itself. It’s another lengthy song and all good things come to an end. Although the entire show was 20 minutes shy of three hours, it passed in a heartbeat. The audio/visual experience was almost indescribable and has to be seen first-hand.