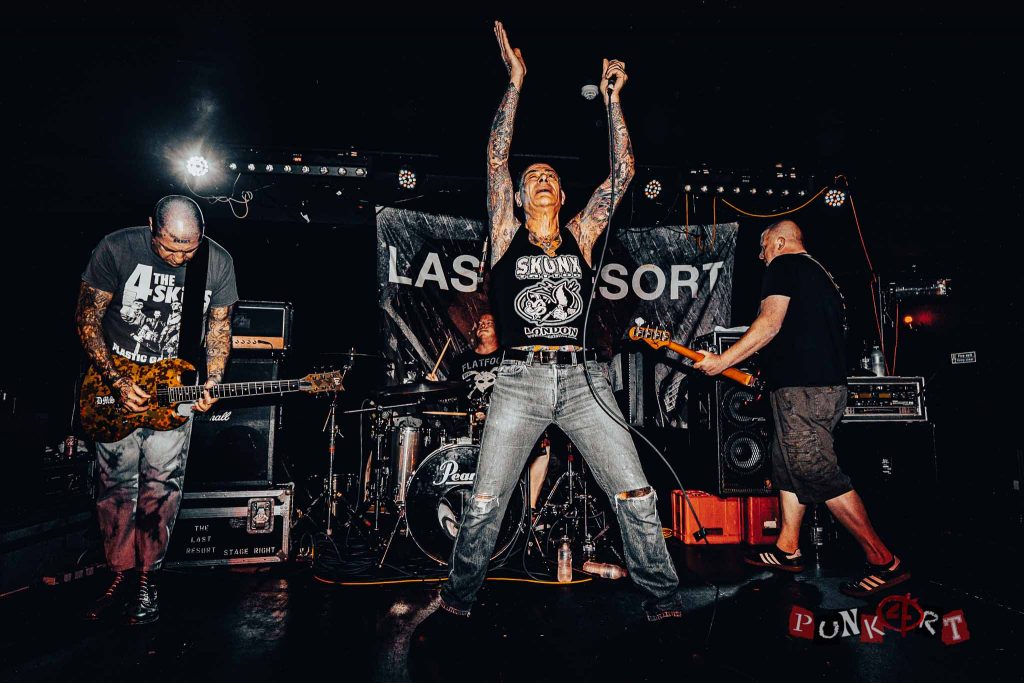 Beat Generator, in Dundee, is a well-known venue for old school punk bands. It has seen many Punk, Oi and Street punk bands throughout the years with Sham 69 and The Cockney Rejects being two of the finest exponents. It was the first time The Last Resort had been to Dundee and the crowd, who had turned out in good numbers to see them, certainly looked like they identified with the band as there was no lack of flight jackets and doc martens. The obligatory “skinhead” of course was evident but it’s often the hairstyle of necessity rather than choice as we age! Undoubtedly, the presence of Lars Frederiksen was another consideration as the legendary American guitarist is a current member of the band and on his own would be a draw for fans of his many bands.

Rare Breed were a great fit as a support band. Local to Dundee, Rare Breed have been building their profile steadily and released their E.P. “Britains Fucked” right at the beginning of lockdown. The set list was based around songs from the E.P. and was well received by the crowd who chose to stand at the back of the venue. Singer Graeme McGillivray loomed large on the stage as he wrestled with his mic stand for most of the set growling and gesturing through the songs. It’s hard to create an atmosphere in a venue when the crowd are reluctant to move any closer but Rare Breed powered through their set opening with “Independence” which is also the opener of their recent release. Guitarist Steve Clark, no stranger to the venue having played many times with his other band The Eddies, held the band together as he swapped between edgy guitar riffs to slick running solos throughout. Bass and Drums were solid as Derek Parlane Ward and Mark Robertson kept the songs planted with their no nonsense playing. Robertson’s drumming was heavy at times and effectively hit home. Rare Breed’s music certainly follows the Oi/Street Punk working class formula so what you see is what you get. The music does have a punk feel to it and I would say having gigged recently, you can hear an improvement on what’s been recorded. The E.P. is raw, what you’d expect from any punk band, but they’ve tightened their delivery and the more gigs they get, the better. The content is basic, singing of fighting, drinking and getting into bother “wi the polis”. The 30+ minutes flew by, and they did what they came to do but without the fights or bother! More to come from these local lads as they have a few high-profile support slots in the calendar.

Possibly the coolest guy in the room, Lars breezed on and took his camouflaged ESP guitar from Neb, his guitar tech, and the band launched into a short instrumental before singer Roi Pearce joined his band mates on stage and shouted “How ya doin’ Dundee… fackin great to be ‘ere”. The set opened with “This is My England”, music has no borders, and the crowd didn’t care as there was a surge of elation on the barrier and they screamed the lyrics back at Roi as he sung about alcoholics, single mum’s and wannabe gangsters on the run. I’m sure that’s applicable to any country these days so a cheeky change of lyric could’ve gone down well. “Cockleshell Heroes” followed swiftly without missing a beat and we got the chance to see Lars in full flow as he effortlessly soloed through the song and showed us why he’s a major draw to see live. The Last Resort were already on fire and they were only two songs in! As the crowd chanted “OiOiOi” back at Roi, they were in their element. “Rebels With a Cause” summed up the band’s intention for this 14-date tour with Dundee being the 3rd in Scotland. It didn’t take long for the band to slot in the new tunes from their latest album, “Skinhead Anthems IV”. “No Man’s Land” was quickly followed by “Devil You Know” as the lyrics were mouthed perfectly by thechaotic crowd. An early set highlight, its chorus was immediately engaging and had arms raised in the air. Lars launched into another killer solo to end the song. There would be a lot more of the album to come but the band made sure the hard-core was catered for as they ripped through some of their older tunes. JJ Pearce meaty/edgy bass was perfectly complimented by Mick’s hard-hitting drums as they opened “Resort Boot Boys” to loud cheers from the crowd and they sang along with Roi, “We are the original boot boys”.The chanting continuedwith“String Em Up” as Roi sang about making the world a better place. Lars took the opportunity to inform the crowd that he intended trying a deep-fried white pudding much to their amusement. The crowd shouted “Haggis” but he told them he’d tried that, but he’d stick to scotch pie’s and white pudding! Another new track from the latest album, “Psychopath” kicked off with Lars before Roi’s lyrics grab you. There was real venom in the lyrics and it made me wonder who the song was about, not someone you’d like to meet! After another few of the older songs, “Boots on the Ground” remind you who the band are as they sing of their way of life and the code they live by. It’s a solid anthemic song and Lars solo work again was a highlight. It was getting near the end of the set and the anthems kept coming with “You’ll Never Get a Job” and “Sta-Press”. The main set ended with “King of The Jungle”. Roi took the opportunity to explain how his football team, Millwall, had an affiliation with Dundee as it was formed by dockers primarily from Dundee over 130 years ago. It’s how they came to wear dark blue, and the crowd gave a cheer as the band ripped through one of their oldest tunes. As it was a school night, JJ explained the band would play on instead of going off for an encore. The opening track from the new album “Freedom pt2” dropped the pace but maintained the menace before the band ended with “Violence in our minds”. To quote the bands Facebook page, “No Mess, No Fuss, Just Pure Impact! A Way of Life!” couldn’t have said it better myself. A solid hour of attitude and music played and sung with passion.