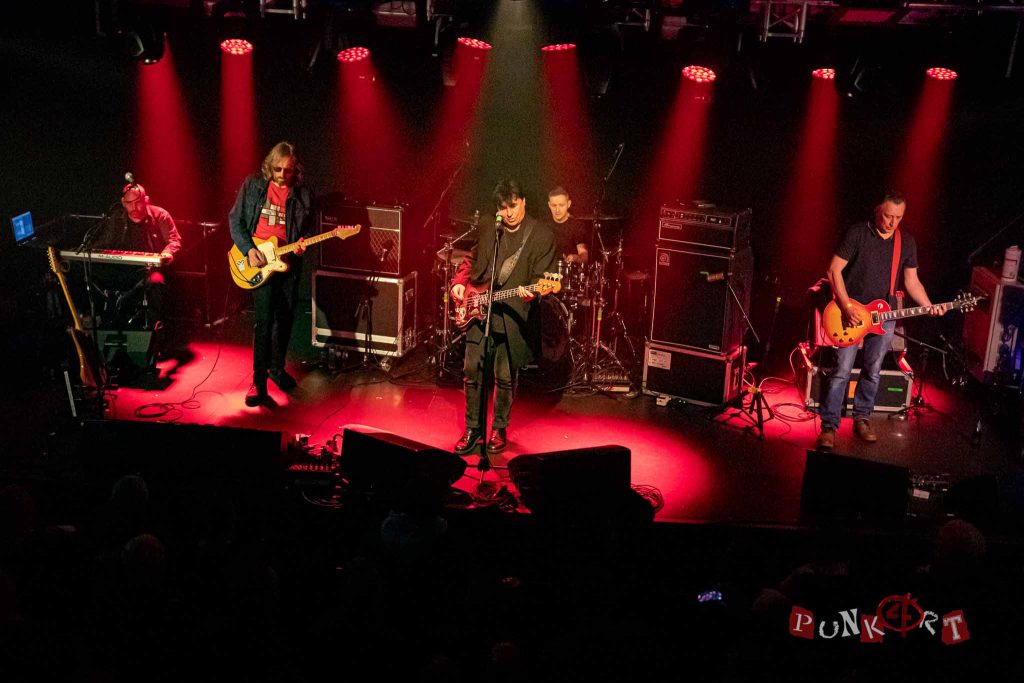 The resurgence of punk and post punk bands continues with a major UK tour by The Chameleons. Originally formed in 1981, it’s a significant anniversary to tour to celebrate 40 years of being a band but in this case, The Chameleons had chosen to tour their 1985 album “What Does Anything Mean? Basically”. Like many of their peers, the band have had their ups and downs and a long hiatus of inactivity, but Mark Burgess had never been busier in the past few years. Apart from the obvious recent lockdown, Mark managed to tour USA, China, Australia and most of Europe. The UK tour features The Membranes, another seminal post punk band fronted by the ever-present John Robb and it’s a great fit. The spectrum of music produced in the 80’s was wide and varied and these two bands are very representative of what was then and now. It was a dreary night in Edinburgh, but the Liquid Rooms gave the respite to the eager fans who had turned out in good numbers to catch both bands. Not quite a sell out like some of the other dates on the tour but a great turn out.

You can never second guess The Membranes. The one main stay is of course John Robb, and he was joined by his long-standing guitarist Peter Byrchmore. Mike Simkins continued his stint on drums and the wonderful, inspired addition of Amelia Chain brought a different vibe to the band. Their music might be austere and dark at times but delivered with such focus and reverence. The set opener was the opening track from their 2015 “Dark Energy / Dark Matter” album. “The Universes explodes…..” demonstrated the dynamic the band create during their performance. It is dark, heavy and explores the “big bang” of how the universe was created with some sex and death mixed in. What else would you kick off with! Amelia Chain provided uplifting backing vocals which went some way to alleviating the sombreness and sheer intensity of the song. Simii’s powerful drumming underpinned Robb’s edgy bass. Byrchmore’s guitar work is searing and urgent and it grabbed you from the first chord. After a 25yr gap in studio releases, the band released two mammoth albums in 2015 and 2019. These albums provided the bulk of tunes on offer. Robb’s stage energy was somewhat curtailed as the limited space meant he was stuck, blocked in by stage monitors and he was limited to his side of the stage, but made the most of it. Never being one for resting on his laurels, he continually jumped and postured when he wasn’t behind the mic. In stark contrast, Amelia was almost trapped behind her keyboard whilst Byrchmore threw moody looking guitar poses with some cheeky grins thrown in. There was a powerful cohesiveness to The Membranes but somehow, they retained a precariousness in their performance. “Do the Supernova” and “In the Graveyard” are almost polar opposites with the latter providing such emotive heart wrenching guitarwork ever heard within its genre. Amelia’s vocal prowess was on show again for the into to “Black is The Colour” before Robbwrestled the attention back as he chanted the song title to the crowd who had braved the dark night. Every night, Robb explains the origins of the song “Snow Monkey” from their latest studio offering “What Nature Gives, Nature Takes Away”. He relay’s the story of the Japanese Monkeys that live by hot pools but had learned to throw snowballs at each other. Whilst it may sound endearing, Robb has used it as a metaphor for the state of the UK. After a thundering version of “Deep in the Forest Where the Memories Linger”, the set came to a close with “Myths and Legends”, a throwback to their early days but revamped and delivered with the bands trademark dark energy.

The last time The Chameleons shared a stage with The Membranes (out with the current tour) was back in 1984 at Manchester’s legendary Free Trade Hall, that itself had witnessed many iconic performances. Liquid Rooms might not quite be as legendary but it’s the performances that make the memories and The Chameleons have certainly been on a mission to re-create and better their past. With the return of Reg Smithies on guitar, the seminal sound the band developed in their formative years had reassuringly returned. As Mark Burgess opened dialogue with the audience, he warned them not to shout out any requests as they would fall on deaf ears as he announced the intention to play though the bands 2ndalbum “What Does Anything Mean? Basically”. Regarded by many, it’s the band finest moment and to any of their hardcore following, a mouth-watering offering to be played faithfully in its entirety. After the brief instrumental “Silence Sea & Sky”, the band fire into life with an inspired version of “Perfumed Garden”. It’s no mistake that nothing had been left to chance as the immaculate delivery of the songs was matched by the live sound which was mixed by Martin Newton. The songs were indeed faithfully reproduced as they were on the album. Burgess took the opportunity to ad-lib (Ian McCulloch style) lines from The Clash in an early set highlight “Singing Rule Britannia”, Burgess sung “White Riot, I wanna riot” before a snarling attack on the government as he growled, “get out, get out of Number 10… Bojo”. The next highlight for me was a resounding version of “Where the Heart Is”. The keys may have been tucked away at the side, but Danny made them come to the fore for this song. Again, the sound production on the night elevated the songs as they came over the PA larger than life and the resurrection of the album was impressive. Burgess reminded the crowd that “like life, most albums are short, so make the most of them”. Very fitting as the band may have slipped out of the memories of many but for one night at least for some, there was the chance to re-ignite the appreciation of the forgotten classic. “PS Goodbye” rounded off the main set. Sticking to the format, the band included the additional tracks that were included in the CD release of the album. The packed audience relished the opportunity to let the atmospheric album wash over them as the layered guitars created an ambience throughout the night. After a brief spell, the band returned nonchalantly to the stage and Burgess playfully spouted, “We play what we want, crazy scotch bloke, we play what we want” right before the band continued their assured performance with “Caution” from their 1986 album, “Strange Times”. Burgess continued his ad-lib by slipping in“Sweet Dreams are made of this” just before the bandsubtly slipped into “Swamp Thing”. The crowd were visibly animated asthe penultimate “Down the Up Escalator” built up slowly with the pounding toms almost drowning out the picked guitar intro. Leading into the final song, Burgess made a heartfelt dedication to one of the fans, Gaz, who couldn’t be at the gig after getting some bad news, but his friends were there to make sure they carried the torch. “Second Skin” closed out a memorable performance as Burgess managed to ad-lib for a final time as he handed over bass duties to Danny Ashberry (keys) and sang “The tide is turning”. An ironic reference from Roger Water’s album “Radio Kaos” and perhaps a nod that the chaos we have recently lived through which just might be coming to an end. If The Chameleons supply the soundtrack for the end of lockdown party, then it’ll bring a lot of joy to many people.

Tickets for the bands tour are available here