The Stranglers in Scotland 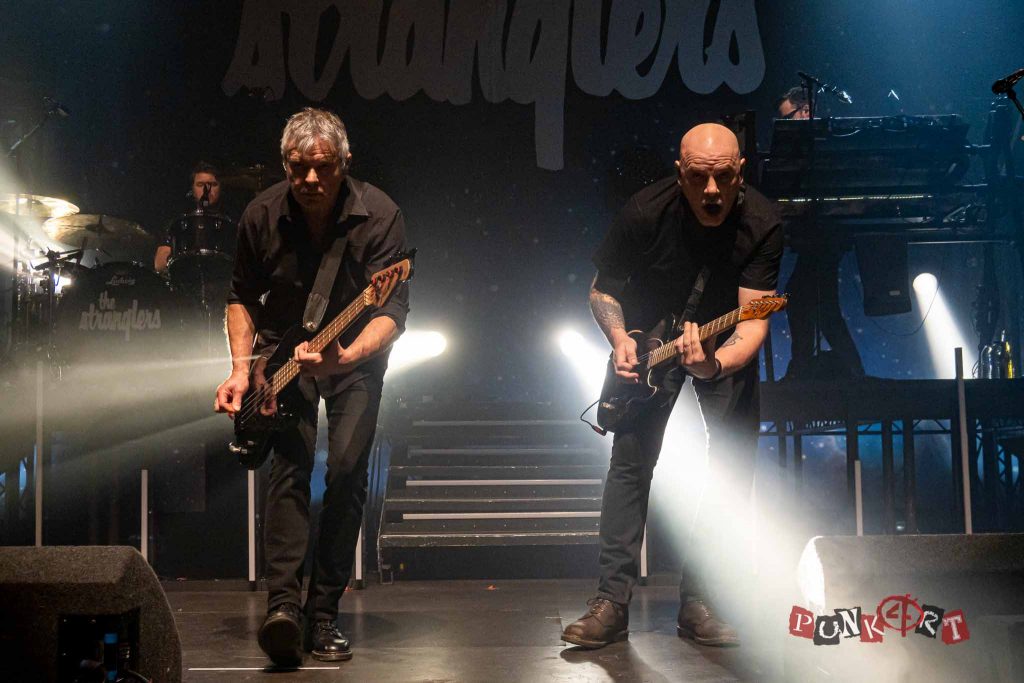 Two long years and the inevitable re-scheduling of gigs may have resulted in a few fans falling by the wayside but there’s still a demand to see this iconic band. The Stranglers have always courted controversy throughout their long career and at times they have been challenged to their very core and with the tragic loss of Dave Greenfield, they took the tough decision to continue when many other bands may have called it a day. Having already had several changes in line up in their 48 years, Dave was probably the hardest member to replace as his signature style and incredible musicianship would be hard to match. With the new keyboard player recruited, a short tour of France got the band back up to speed and gave them the appetite to take on a final full UK tour. In memory of Dave.  The Stranglers have had many wide and varied support bands join them throughout the years but possibly the best of those were signed up for the 2022 Dark Matters Tour. Ruts DC are a headline band in their own right and with a long and rich history with the band, they were the perfect choice. As many fans would appreciate, two amazing bands for the price of one!

No strangers to loss, Ruts DC were formed after the death of their singer Malcolm Owen only a few years after their inception. It may have been a long time ago, but he burned bright and left a lasting memory. Original guitarist Paul Fox also passed away in 2007 and this led to Leigh Heggarty joining. He was clearly the best fit for the three piece as he was not only a friend but an incredible guitarist. Fox had such an iconic sound, but Heggarty not only faithfully reproduced but added his live flair. Both bands have an incredible back-catalogue to draw from and Ruts DC never disappoint. Regular visitors to Scotland, the band have made many friends and fans throughout the years and judging by the packed venues at the Music Hall in Aberdeen and O2 Academy in Glasgow, they had turned out in droves. The customary half empty room for the support band did not apply for RutsDC. Testament to their popularity, they rewarded the early onlookers with “Something That I Said” to kick off their sets. Bassist Seg’s Jennings engaged with the crowds in Aberdeen and Glasgow to relay the bands joy at being back playing live. Dave Ruffy looked like he was in a playful mood sporting a T shirt in Aberdeen using the Public Image Ltd log but spelt “iLL” instead of “PiL”. Not as dapper as his band members who still rock suits jackets, shirts and Trilby hats. There’s promise of a new album this year to follow on from their critically acclaimed album, “Music Must Destroy”, the highlights of which are regularly played and although the title track was not, “Kill the Pain” went someway to easing the last 2 years of pain having no gigs to attend. Other seminary songs in the setlist included “Suss” and “In A Rut”. A new song from the imminent album preceded “Jah War” and received promising feedback.

No Ruts performance would be the same without “West One” and “It was Cold” as the guitar work from Leigh is a personal highlight.  The crowds in Aberdeen and Glasgow showed their appreciation by turning out in droves and giving the band a rousing reception as they played their two chart singles “Staring at the Rude Boys” and “Babylon’s Burning” but it was “Psychic Attack” that brought the evenings to a close. With a UK tour planned for later in 2022 and a few festivals on the horizon before then, the band will be busy recording and releasing their new album before then. Judging by their relish still to perform, there’s plenty life left in the band. 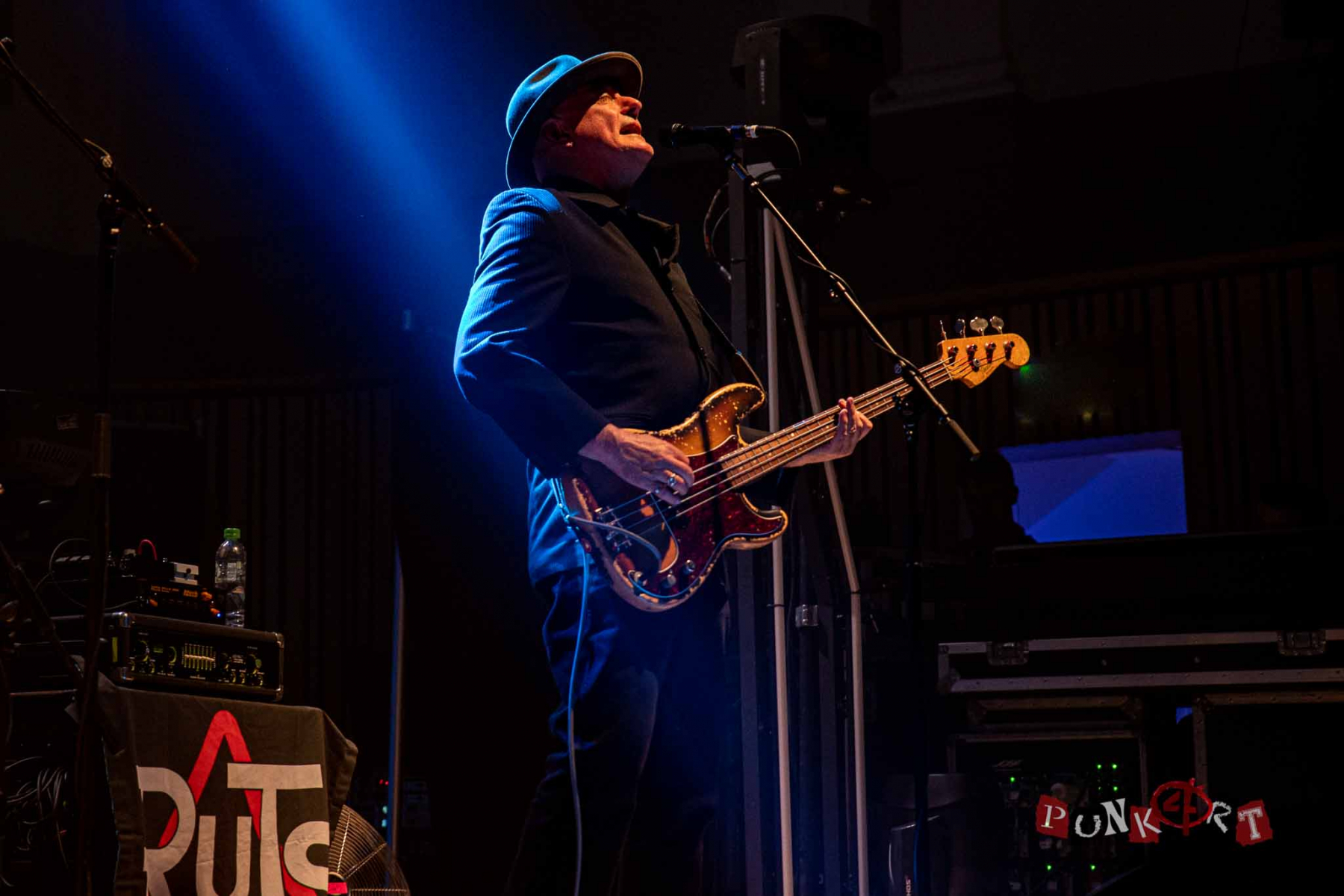 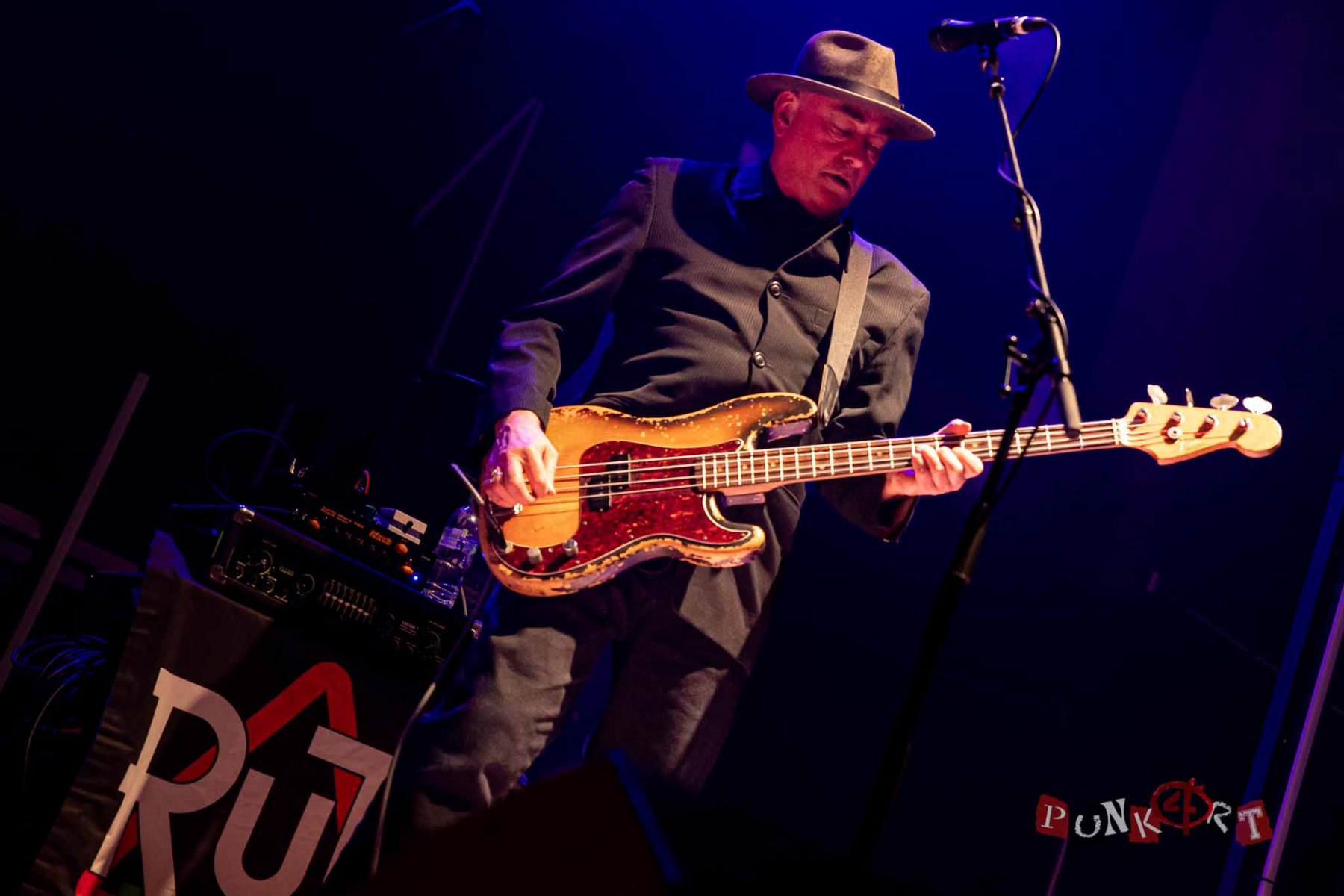 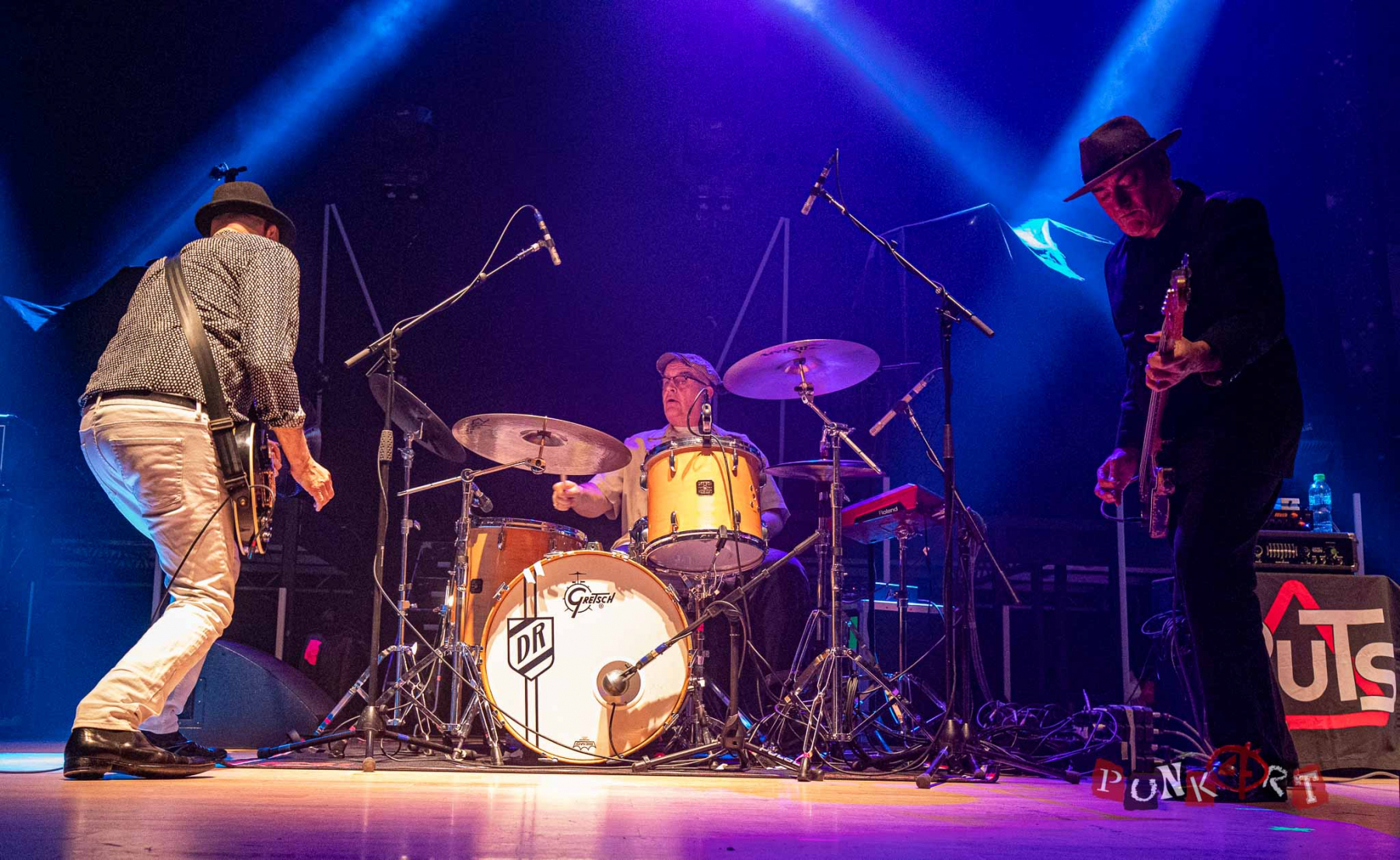 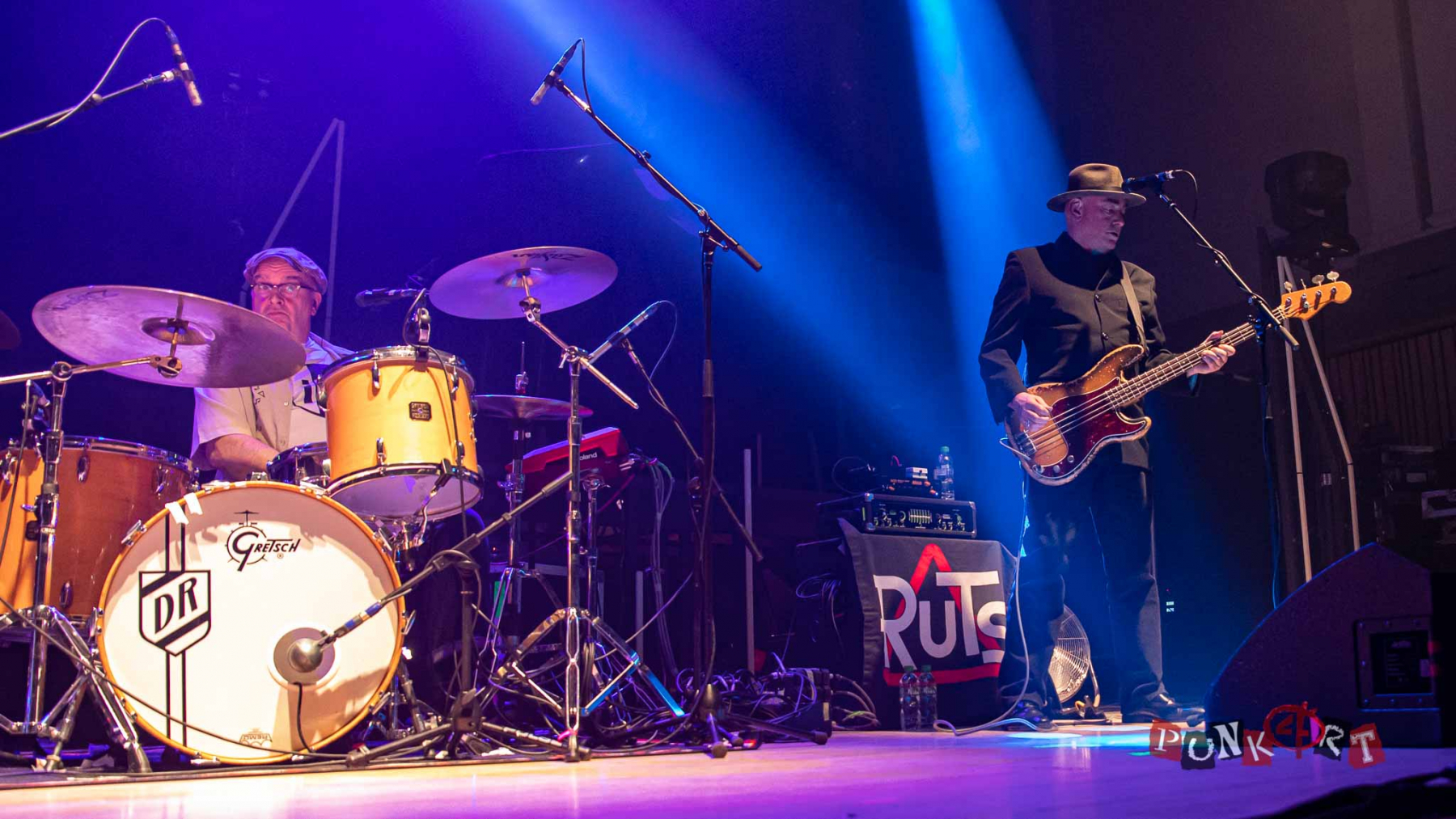 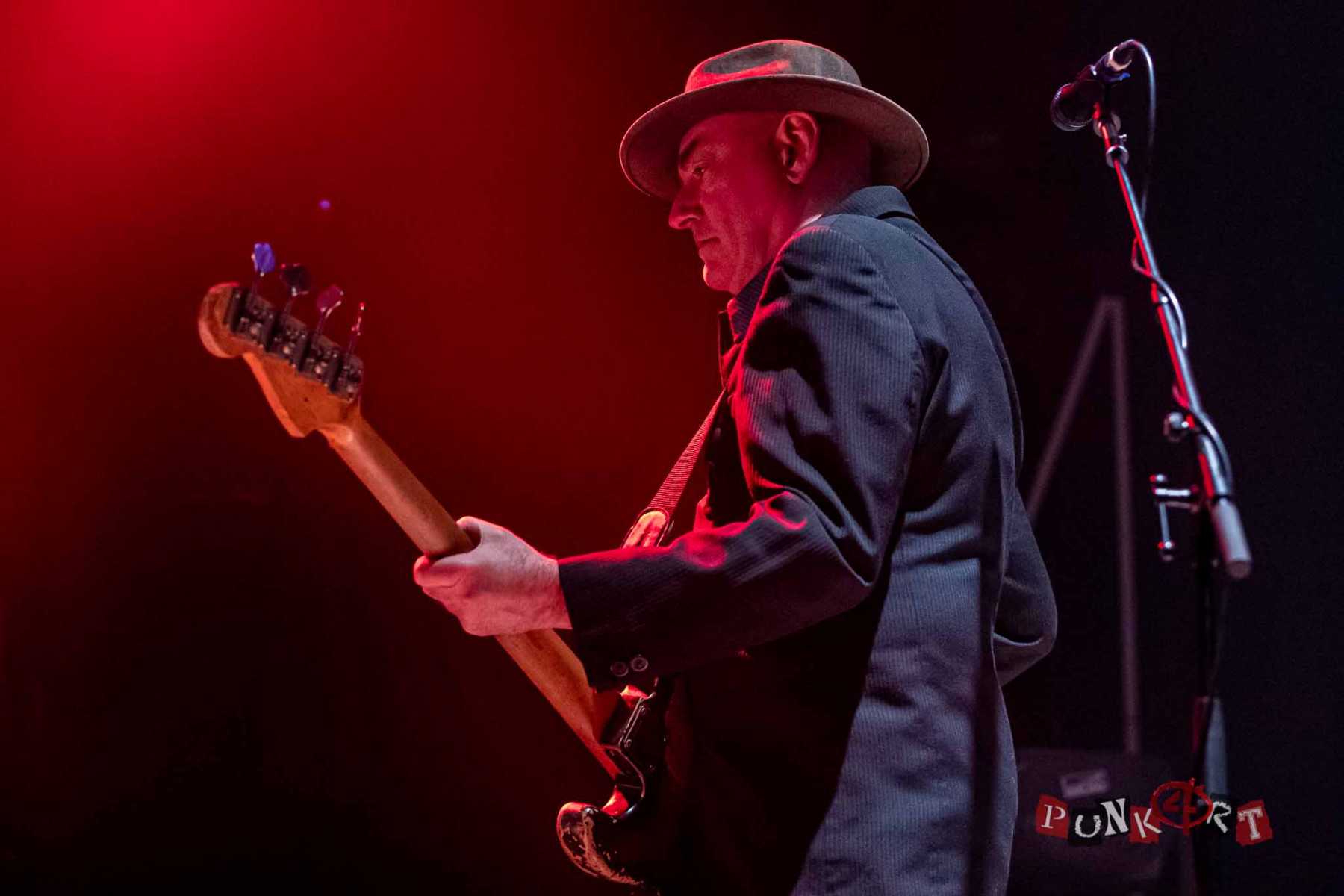 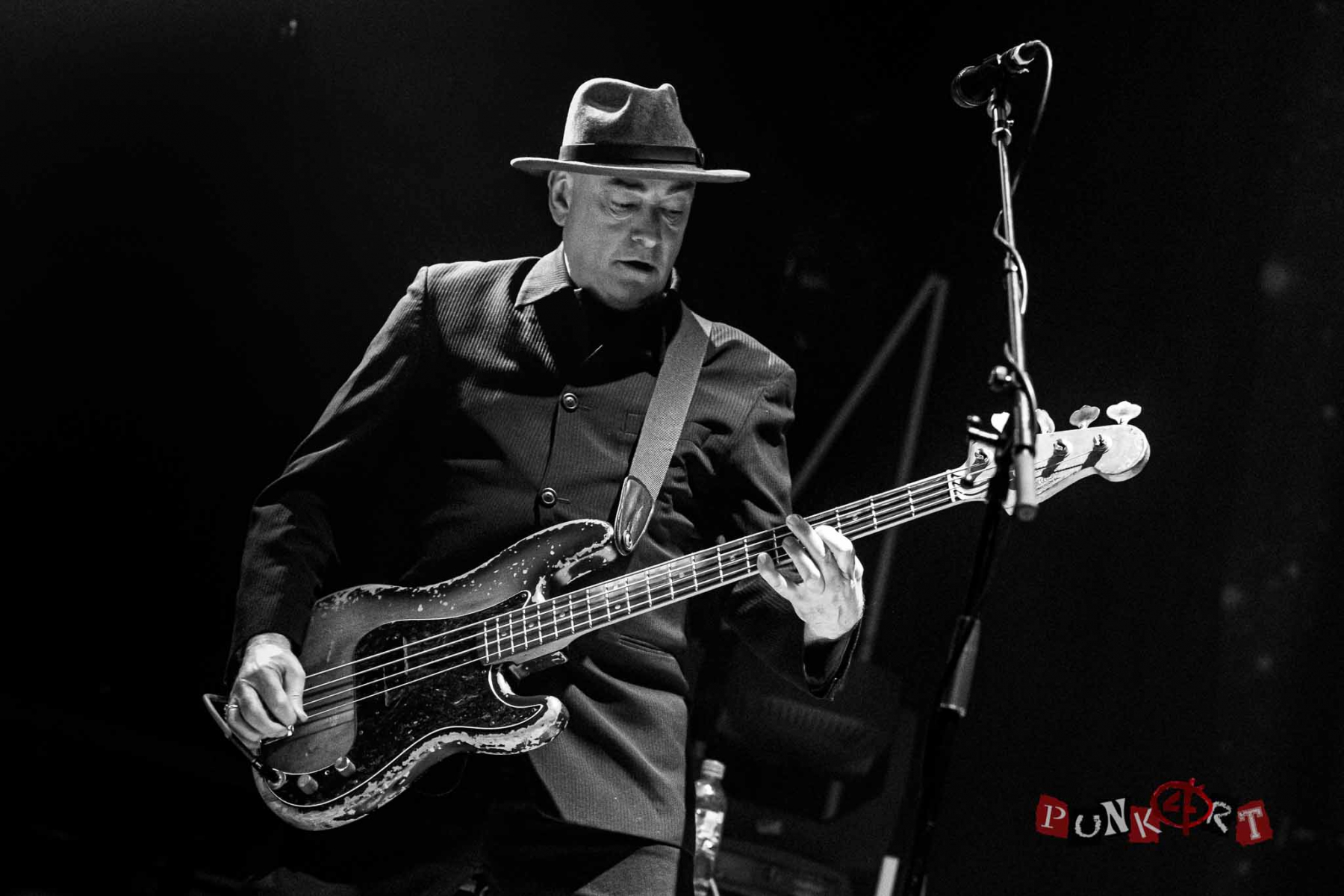 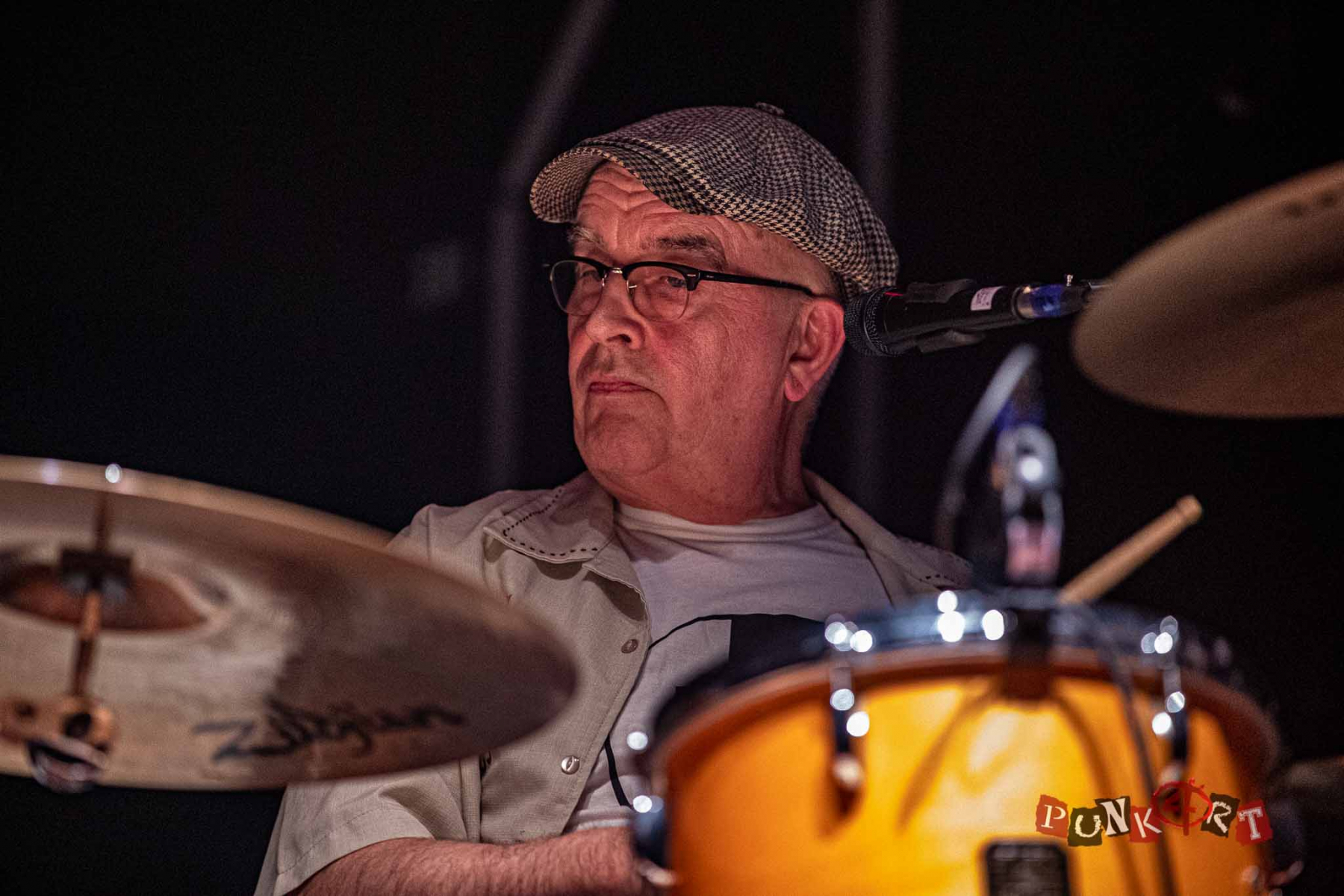 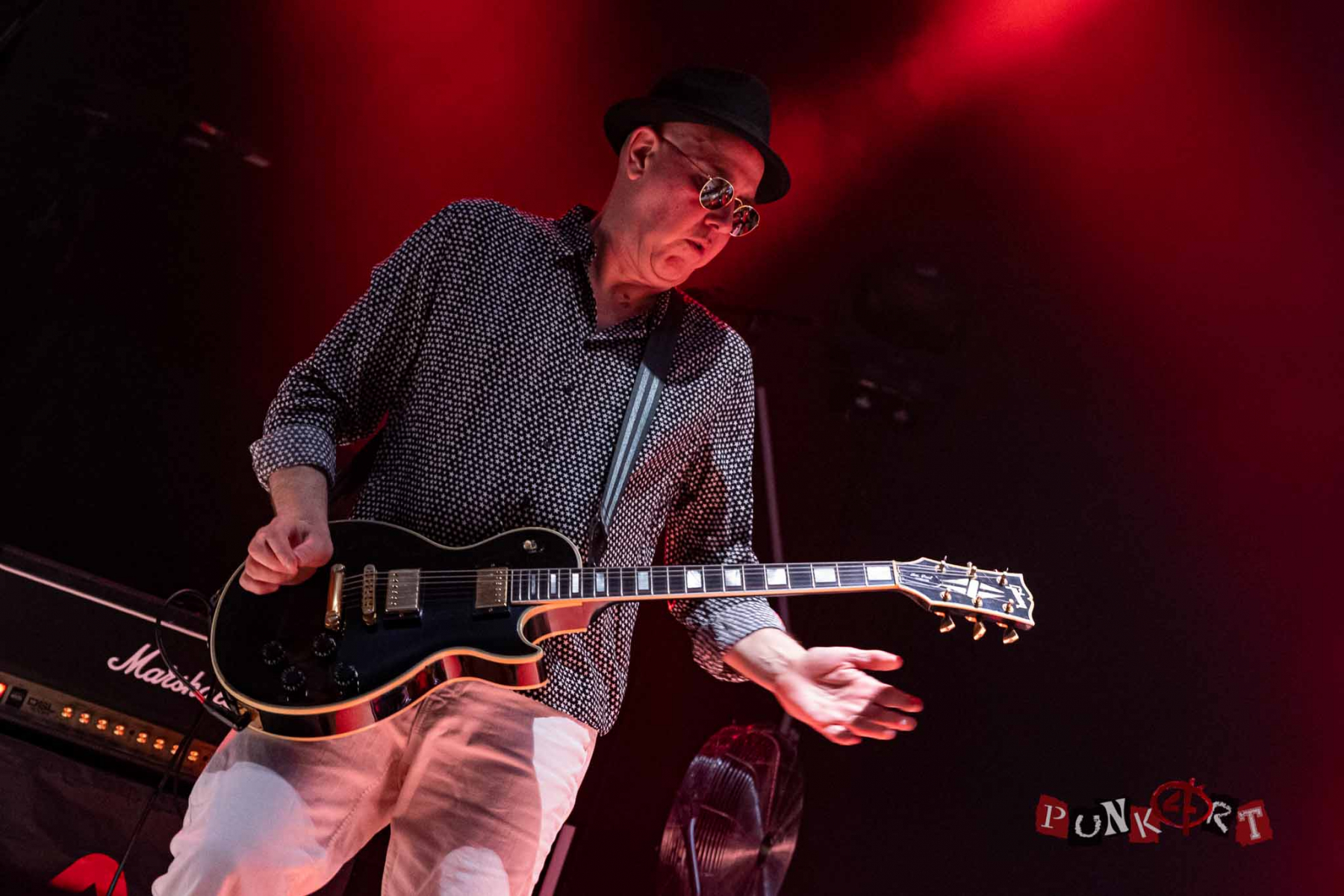 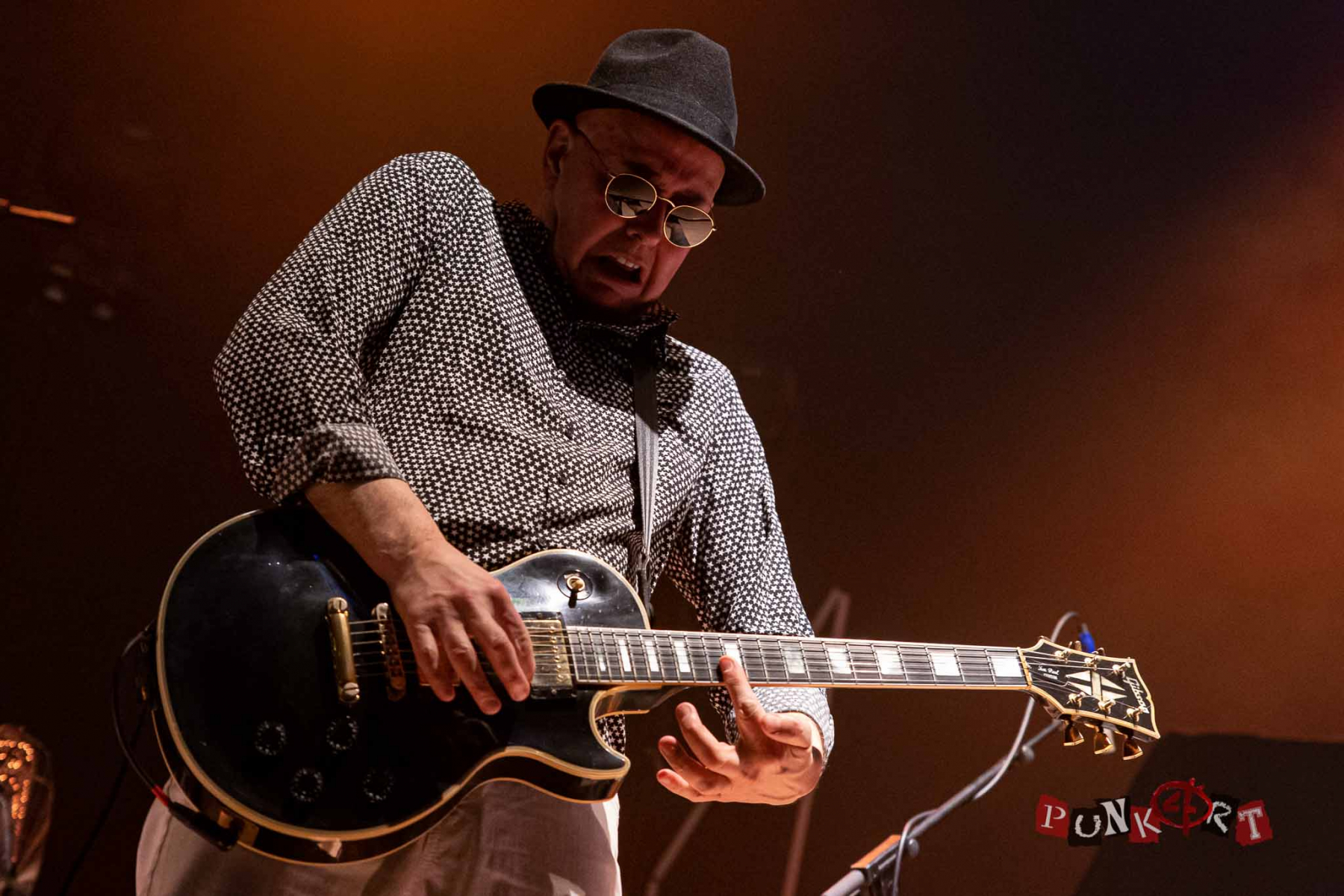 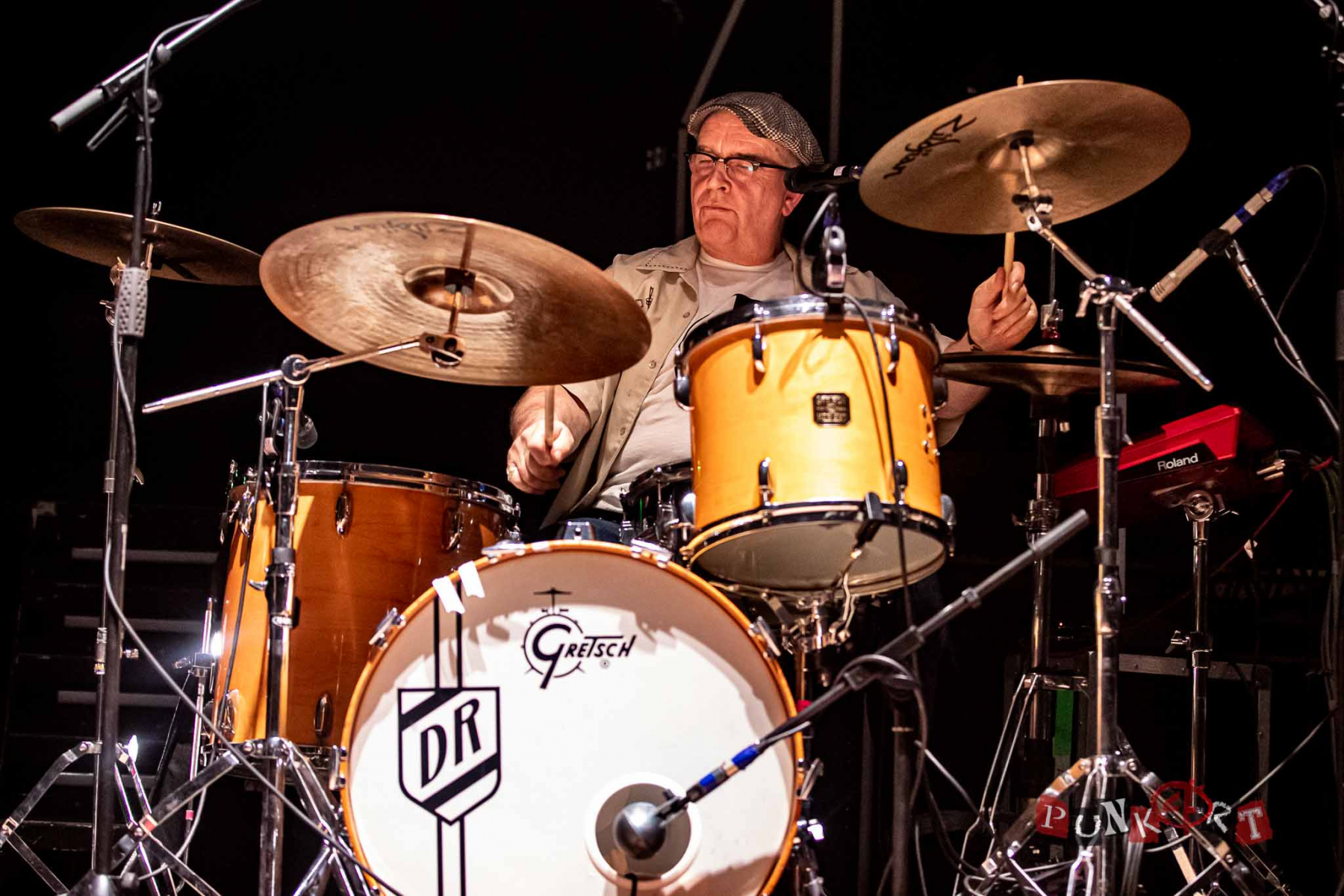 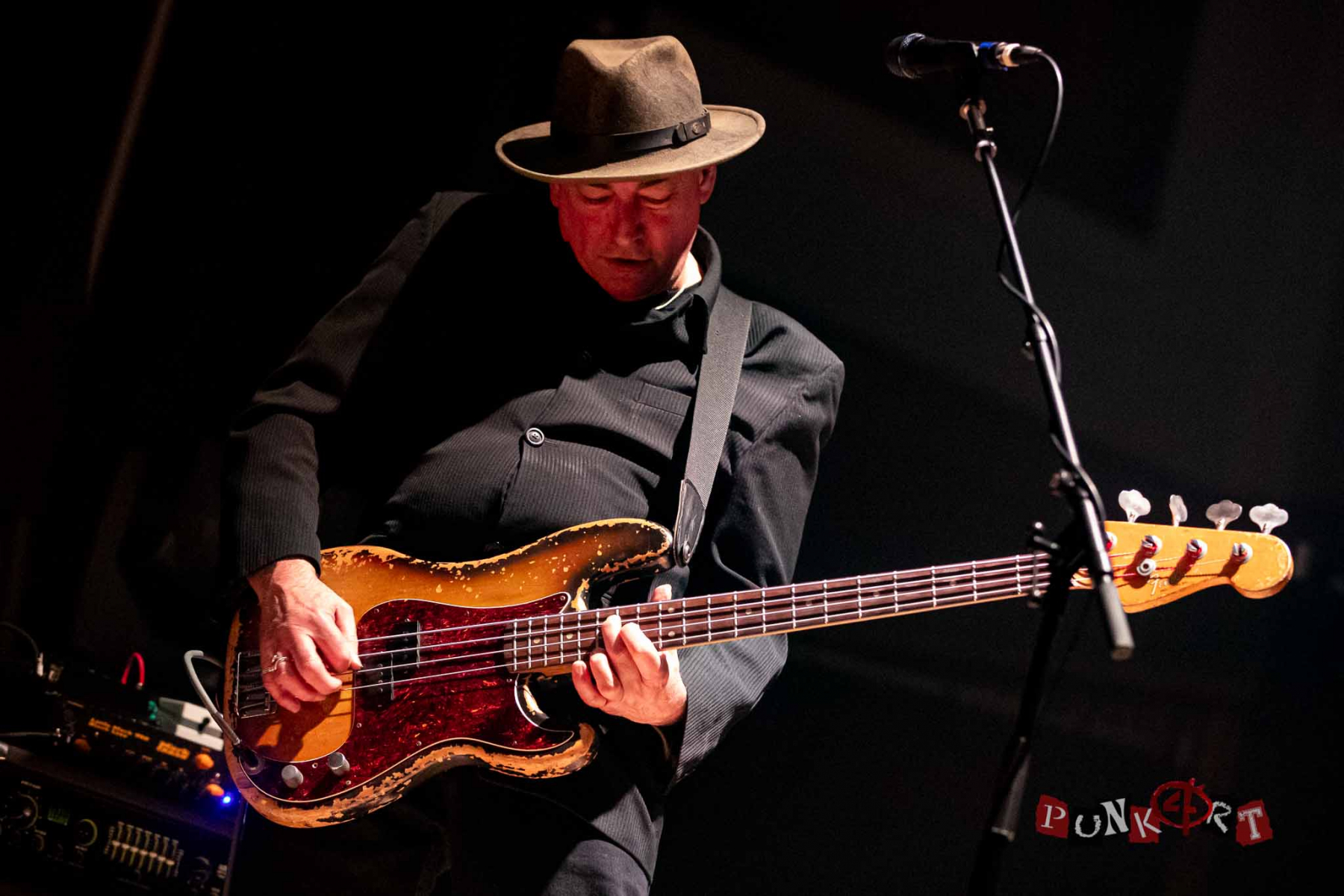 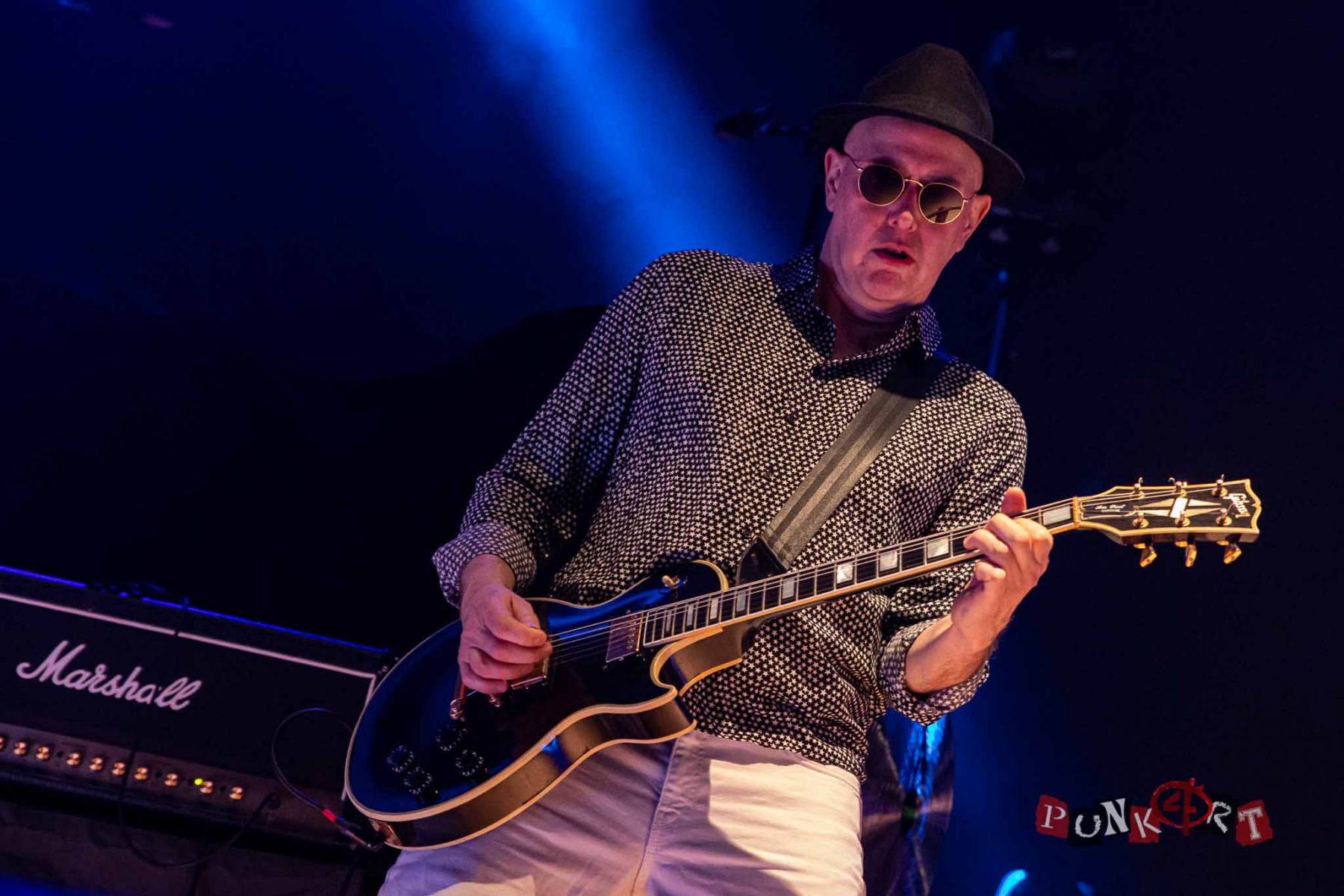 The lights went out and “Waltzinblack” signified the imminent appearance of the Meninblack. There’s always an electrifying anticipation of what The Stranglers will open with and set the tone of the evening. Jean Jacques Burnel’s growling bass opened their sets as he ripped into “Toiler on The Sea” with attitude. “Baz Warne’s” cutting chords weren’t far behind before the solid drumming of Jim Macauley. Toiler gave the audience its first opportunity to hear new keyboard player Toby Hounsham and draw comparison to the legendary Dave Greenfield. There was a massive expectation from the hungry crowd, and they were instantly gratified every evening as Toby launched into each song like he was on a mission. With such a huge back catalogue of songs, and the fact that it had only been a few months since Toby had joined the band, the fears of the crowd were easily put to rest as Toby’s professionalism and ability put any concern to rest immediately. The fact that he had played in a tribute band many years ago probably went a great way to helping him fit in.

With a new album to share live, it didn’t take long into each set for the first song to be played. “Water” has been in the set for nearly 4 years as it was one of the first songs written for the new album and been part of their main set for some time. The Stranglers do switch their setlist around every night and “The Raven” was met with a huge cheer in Aberdeen. The Stranglers fourth album featured a few songs throughout the set and is a favourite for many of the fans. The hard-core still call on those early albums to be aired and of course, they were not disappointed. “Sometimes” is the first track off their debut album “Rattus Norvegicus” and featured early every night. Any memory of the early line up was a memory as the four current band members showed they not only replicate the sound but all but match the attitude as Baz snarls and JJ still kicks out and prowls the stage. The real belligerent antagonism may have gone, but you wouldn’t want to argue with either of the front men! There’s irony in “I’ve Been Wild” but the Meninblack still carry some menace. Baz does like to ad-lib at times during the songs and this was true during “Peaches” as he found a new subjects each night to either malign or make fun of after he sung the line “I can think of a lot worse places to be…” In Aberdeen, he joked about “Being on the end of Toby’s skewer”, but Glasgow got references to “Number 10” and “The Ukrainian Border”.

The Stranglers have a diverse history and the hits they had in the 80’s demonstrate this. After the early opening energy, “Nice N Sleazy” signature grove made way to a rarely performed “Don’t Bring Harry”. The predominance of the keyboards continued with “Strange Little Girl” as the early/mid 80’s songs were celebrated with the addition of “Always The Sun” and “Golden Brown”. These songs are often lamented by the hard-core, but the riotous applause would demonstrate they’re the guilty pleasure of many. Laughed off as a bathroom break for many, the harpsichord haven has the four heroes being sung at by the massive sell out crowd. JJ quietly started the intro to “Baroque Bordello” and the buzz from the crowd grew as they realised what was being played. The band were at their height in 1979 and although the dulcet tones of Dave were missing from the song, Toby gave a reminiscent haunting vocal to top off the song. The next song showed the band were far from done and have plenty more to offer. With a nod to the electronic 80’s, there’s almost a “New Order” influence to “White Stallion”.

The heavy electronic pounding bass / synth backlines filled the venue. If The Stranglers were to every write a bond theme, this wouldn’t be far off it. JJ seemed to get lost in the moment at times as he spread his arms wide as if to hug the entire crowd. From the headiness and elation of stallion, the band brought the halcyon days back with a bang with “Curfew”, JJ sung the lyric “Go to Scotland, no obligation” as the entire audience shouted it back to him and proved the band will never be obligated to come back. Baz Warne’s influence on the band is demonstrated with “Relentless” as the signature Stranglers sound benefits from his take on it and expanded. His vocal delivery is also an important part of the band’s sound and based on the three nights in Scotland, he’s grown as a singer. The back catalogue was again well served as the run out to the main set had some blistering performances of “Nuclear Device” and “Straighten Out”. The crowd always love an excuse to bounce along but the melodic interludes are always welcomed as well to give the aging audience time to recover. “Walk on by” of course gives the crowd some respite and enables them to stand back and marvel at the individual brilliance of the four members of the band. Heavy bias on the keyboards, it gave the crowd the reminder that Toby is a considerable talent, but the bass runs, and sublime guitar solos soared throughout. The main set was ended with Baz adorning an interesting looking Burns guitar to audition “The Last Men on the Moon” to most of the crowd. One of the highlights from “Dark Matter”, the keyboards faded into the ether and darkness once again fell upon the venue.

There was movement on the stage and two stools could be seen awaiting their counterparts. After a few dark moments, JJ and Baz adorned the stools, JJ was armed with an Acoustic guitar, and he picked throughout the opening chords to “Lines”. It’s a stripped back song lamenting the reasons for the lines upon the face for the subject. The melancholy continued as JJ took the opportunity to say a few words about the lamentable past two years and the toll it’s taken on everyone present and of course the band. The poignant “And If You Should See Dave” was respectfully received by the entire crowd as they took a few precious moments to remember the fallen phenomenon that was Dave Greenfield.

Each night brought a chance for the crowd to cheer for a choice of encore. Aberdeen gave a huge cheer for “Grip” and in Glasgow, they were treated to an incendiary version of “Tank” on the first night and both songs on the second night. Of course, what song could the four heroes end with, yes, the signature bass intro from JJ brought the loudest cheer each night as “No More Heroes” ended the 2-hour show. Baz thanked Aberdeen and Glasgow for all their support throughout the years and we wonder what the future will hold for the band but meantime, they will continue to tour the UK for the duration of February to a great number of sold out shows. If the band continues at their current pace, the hard core and newfound fans are in for a treat. 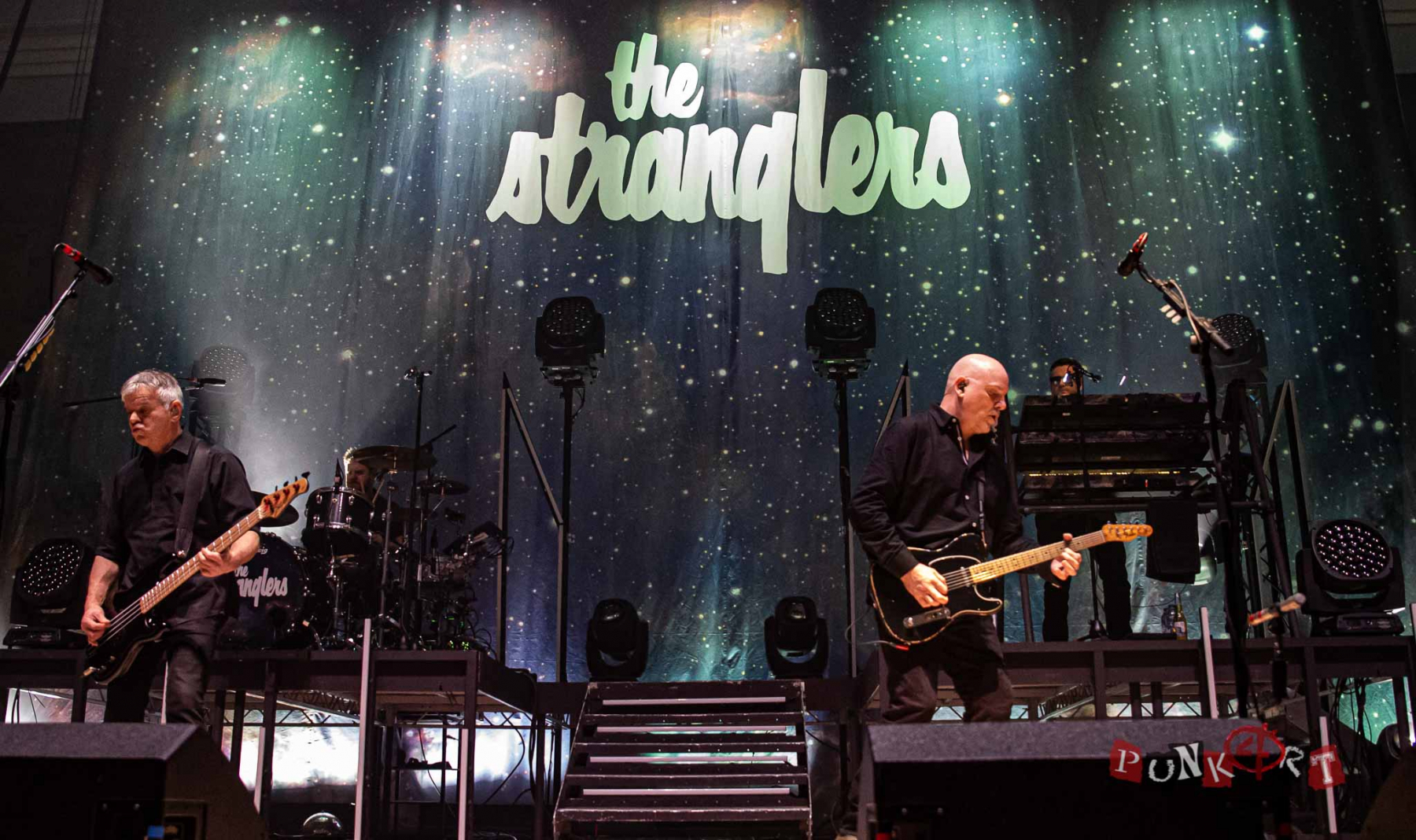 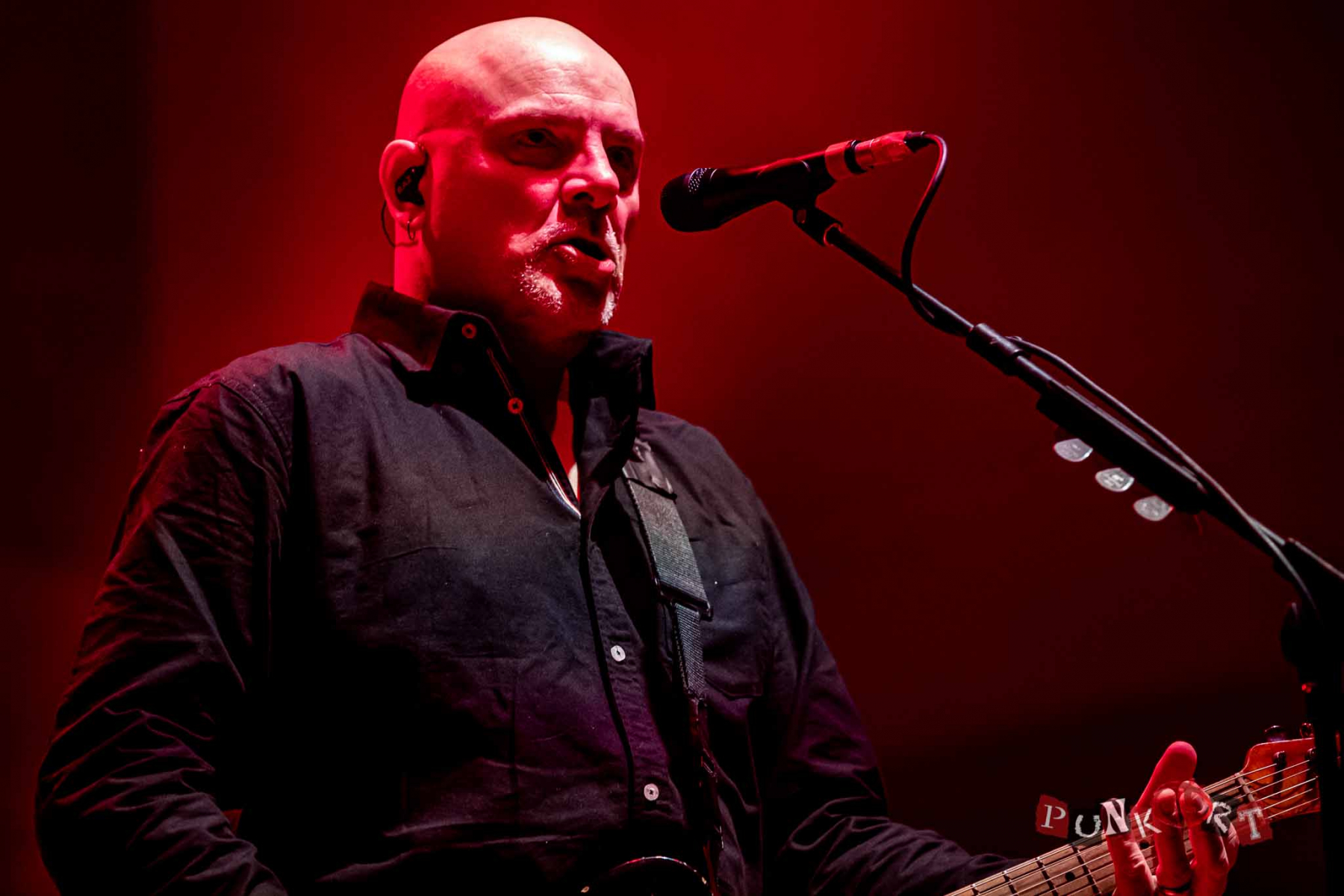 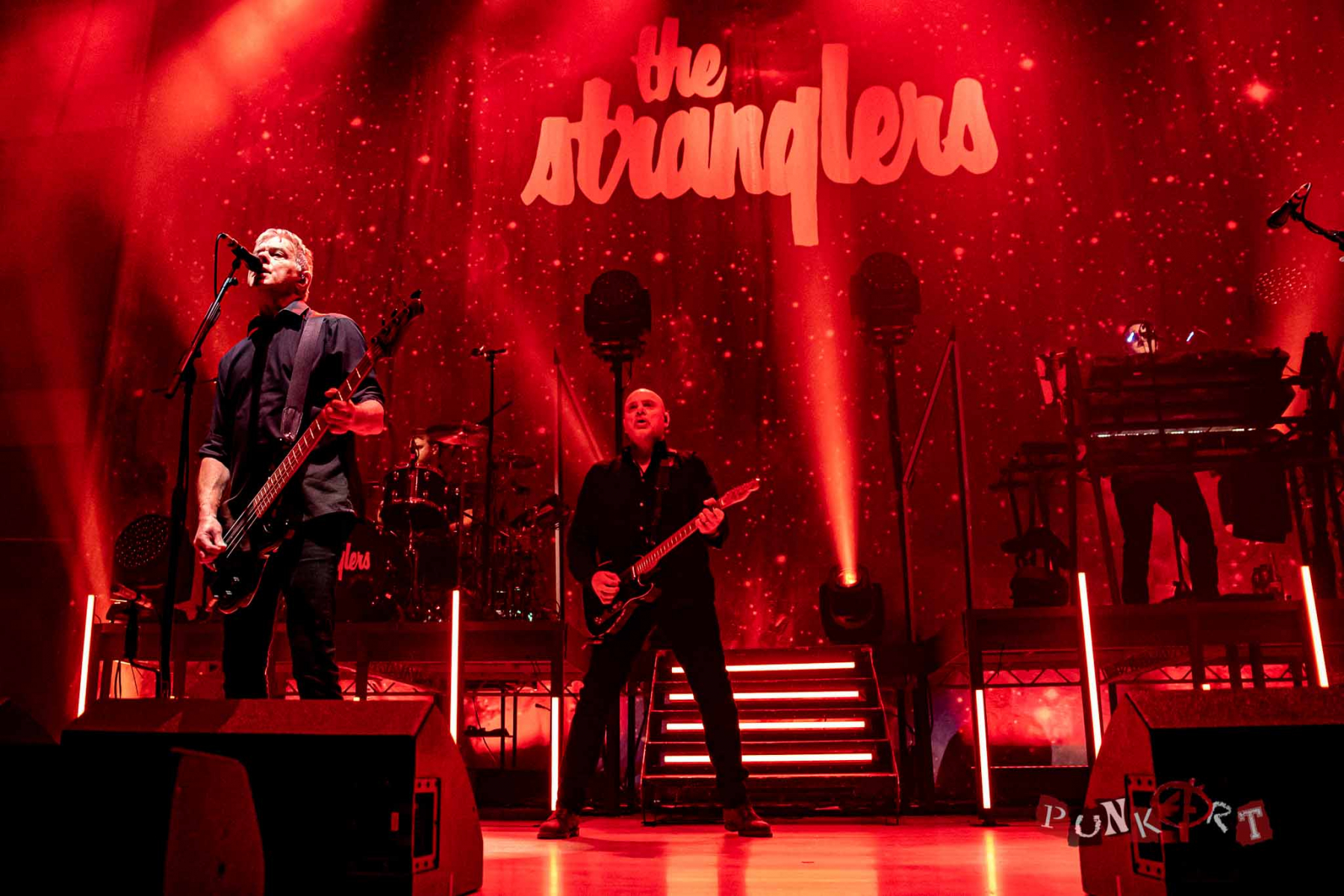 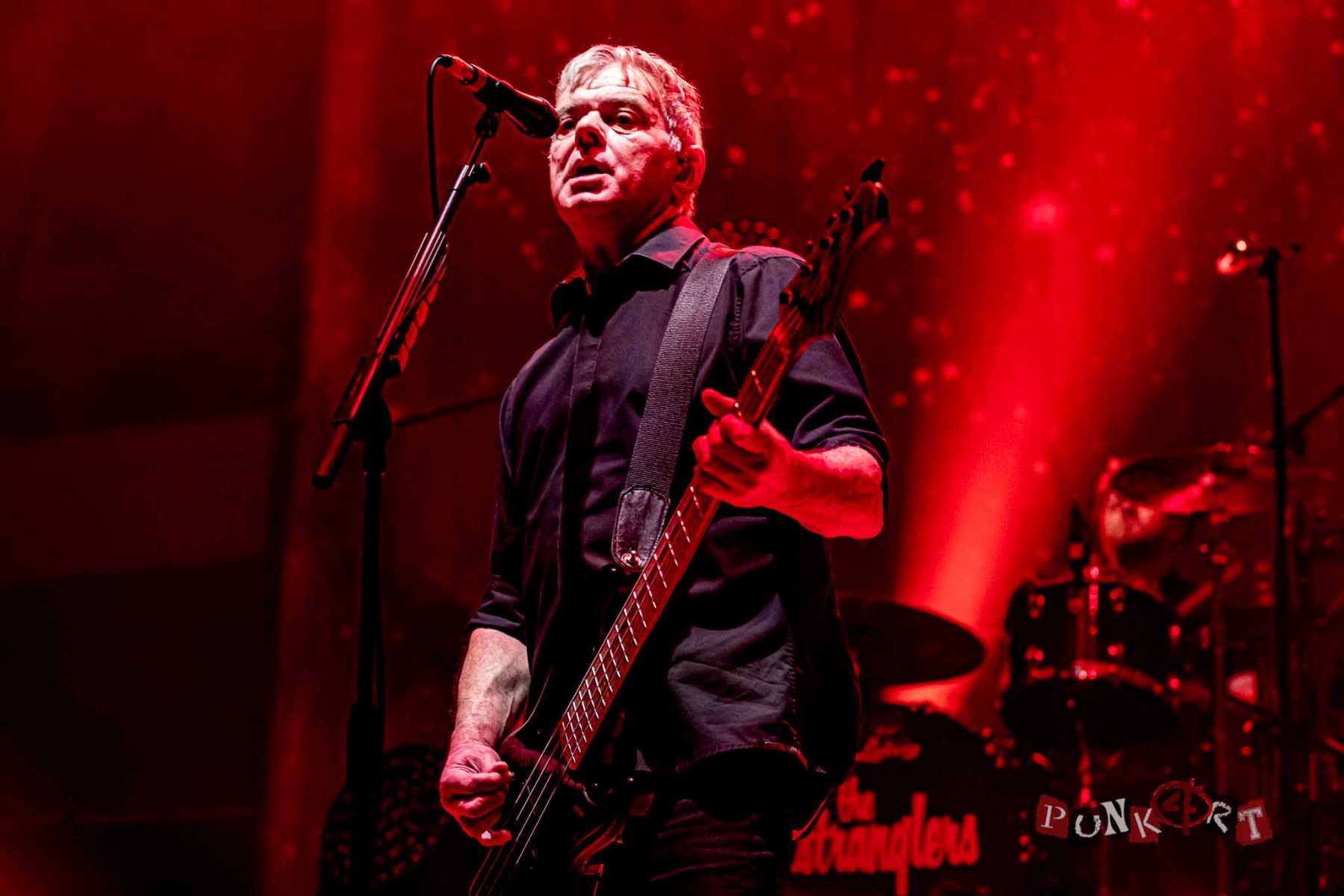 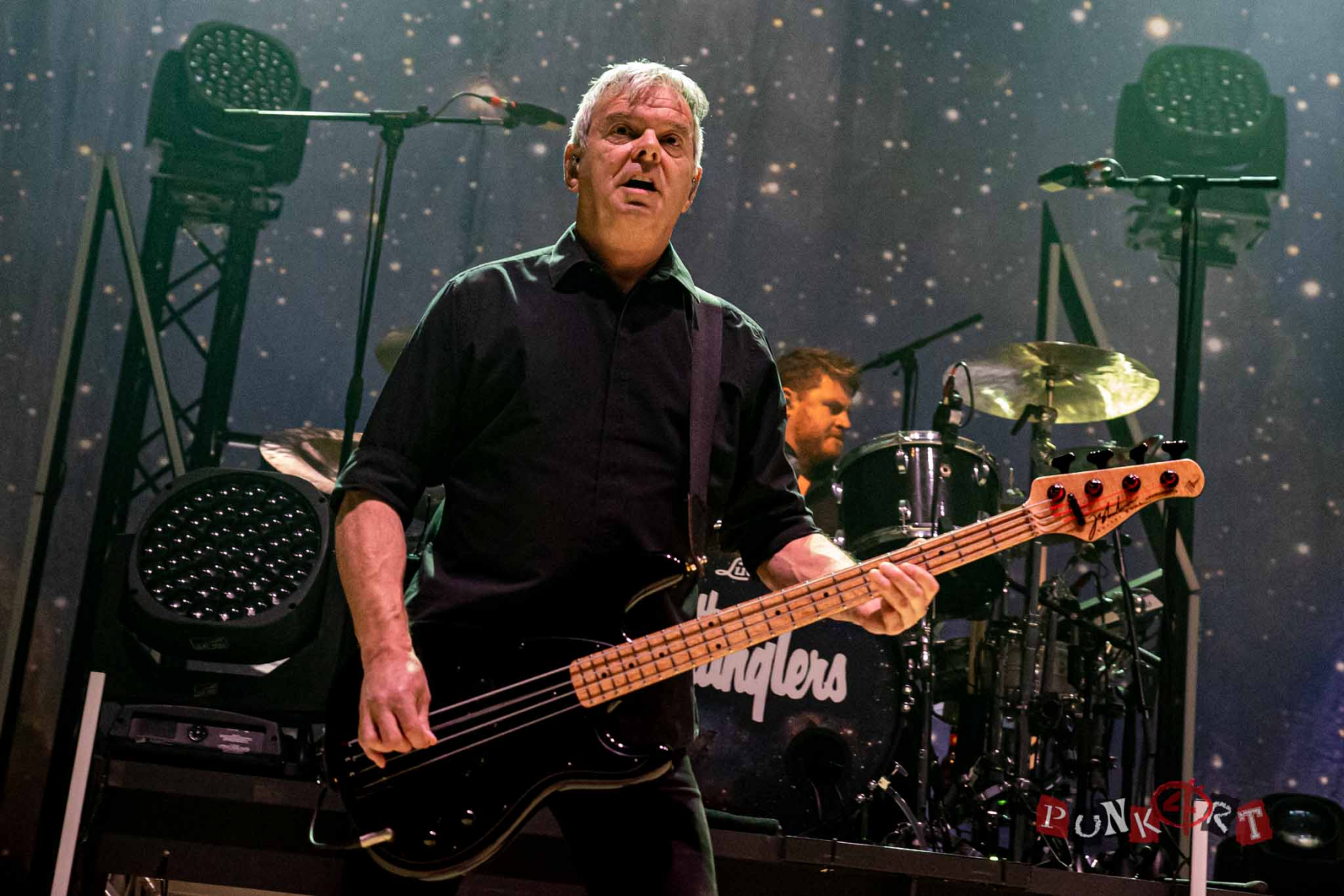 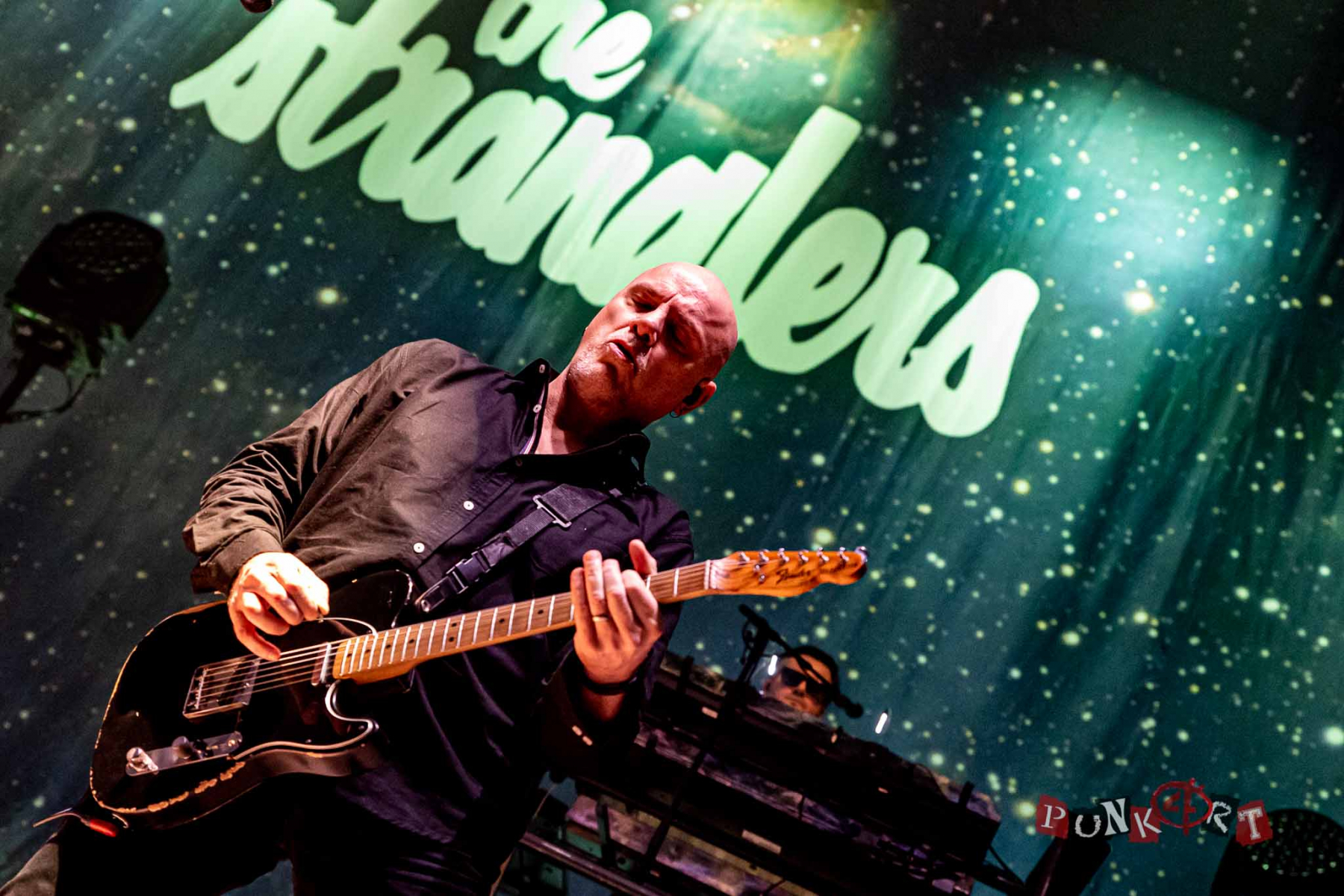 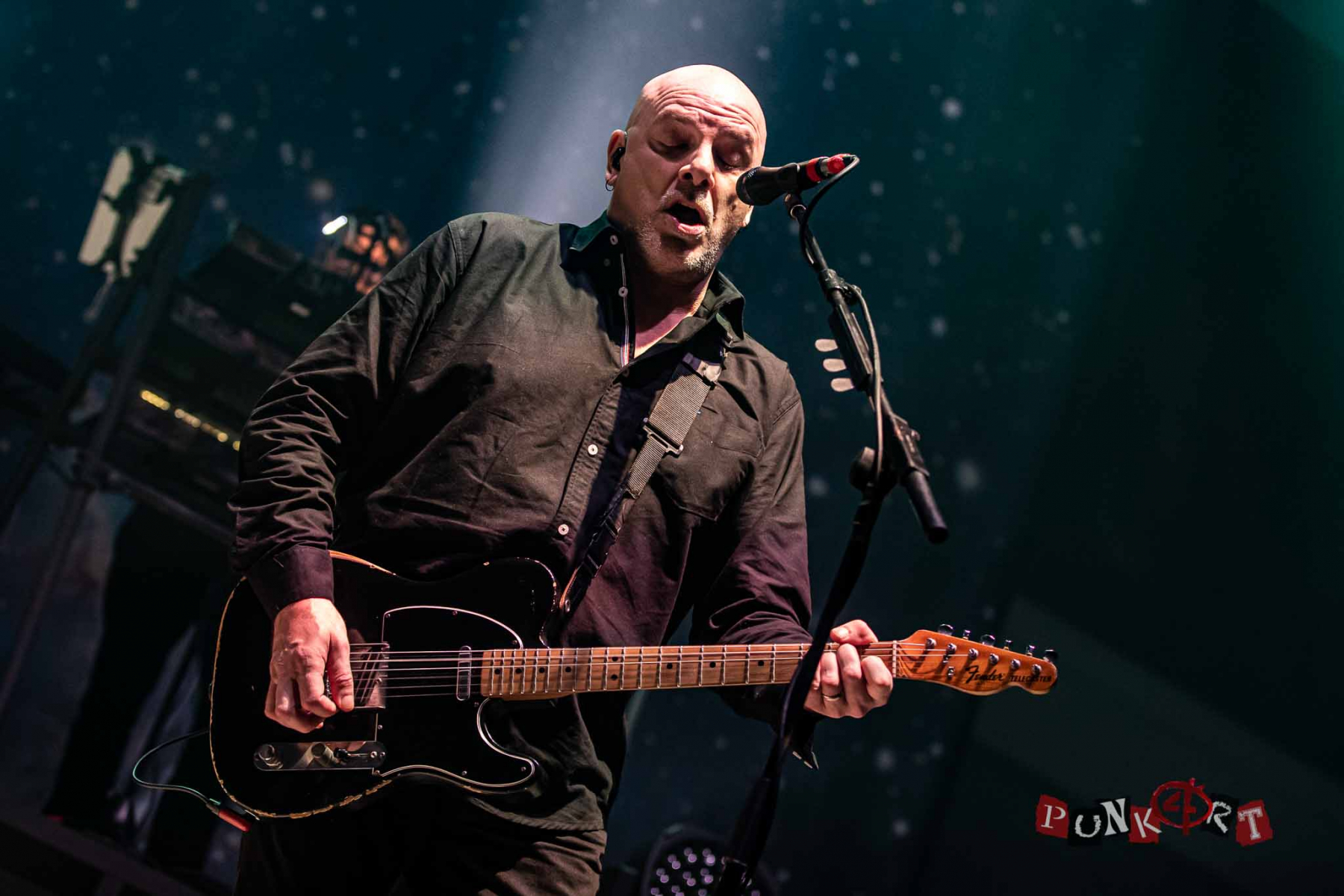 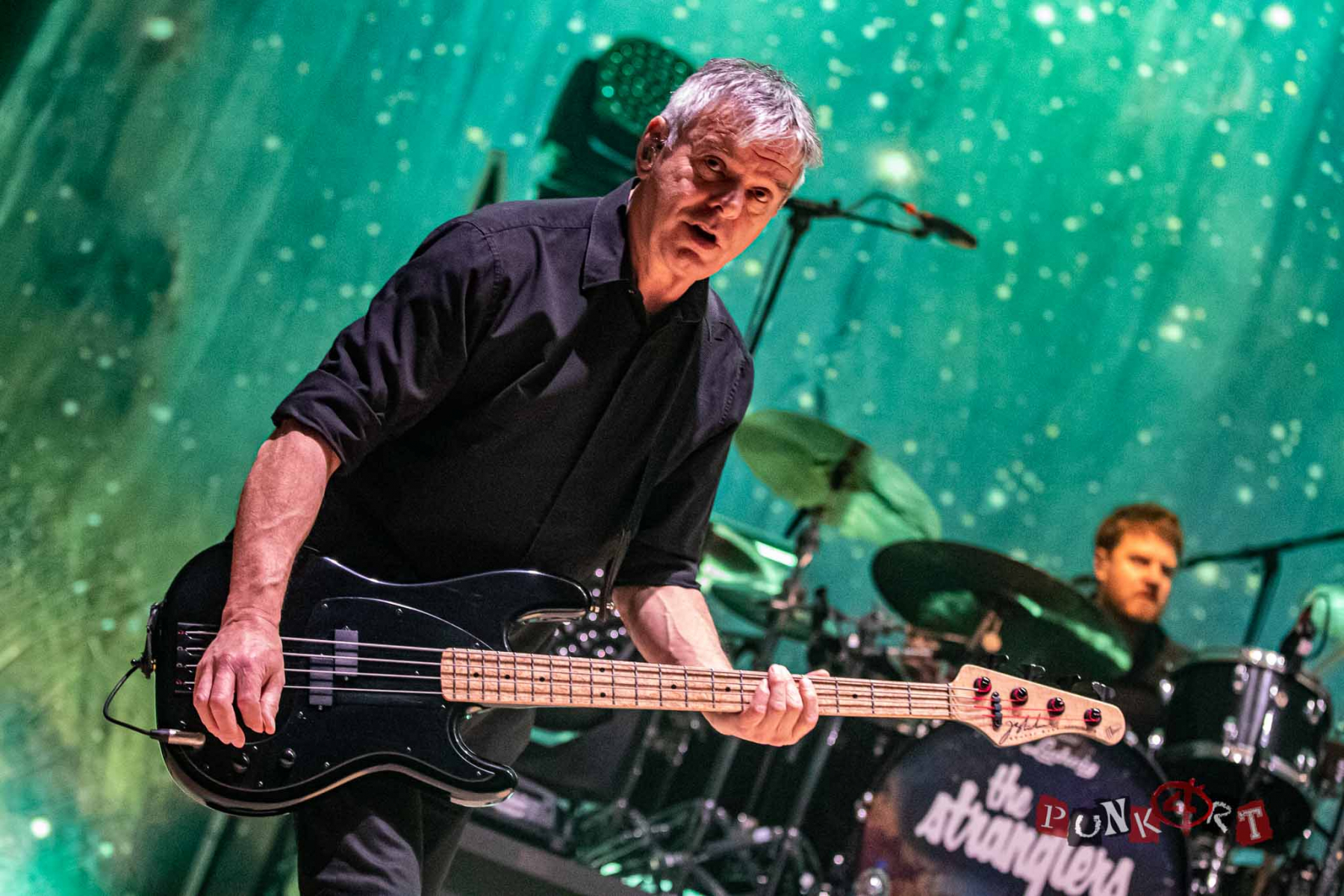 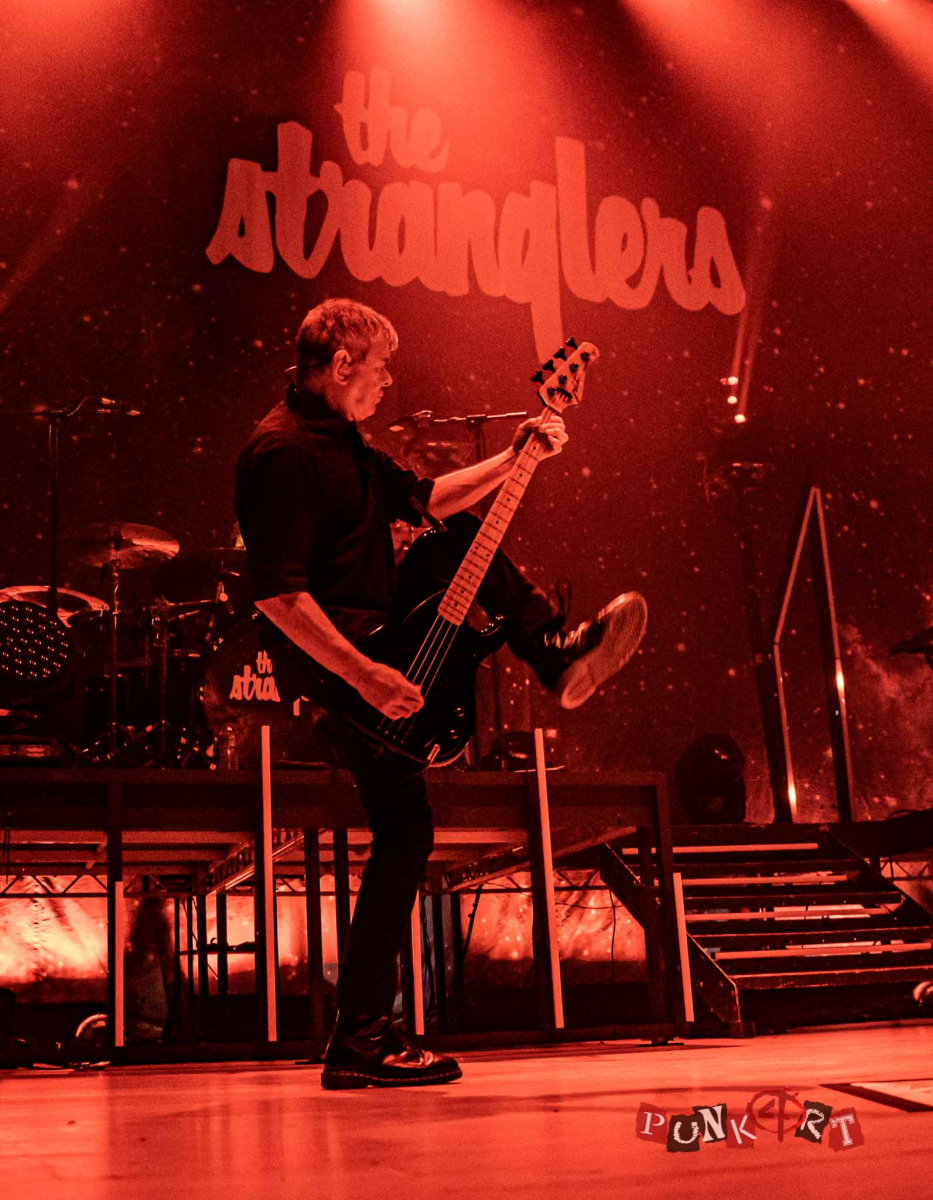