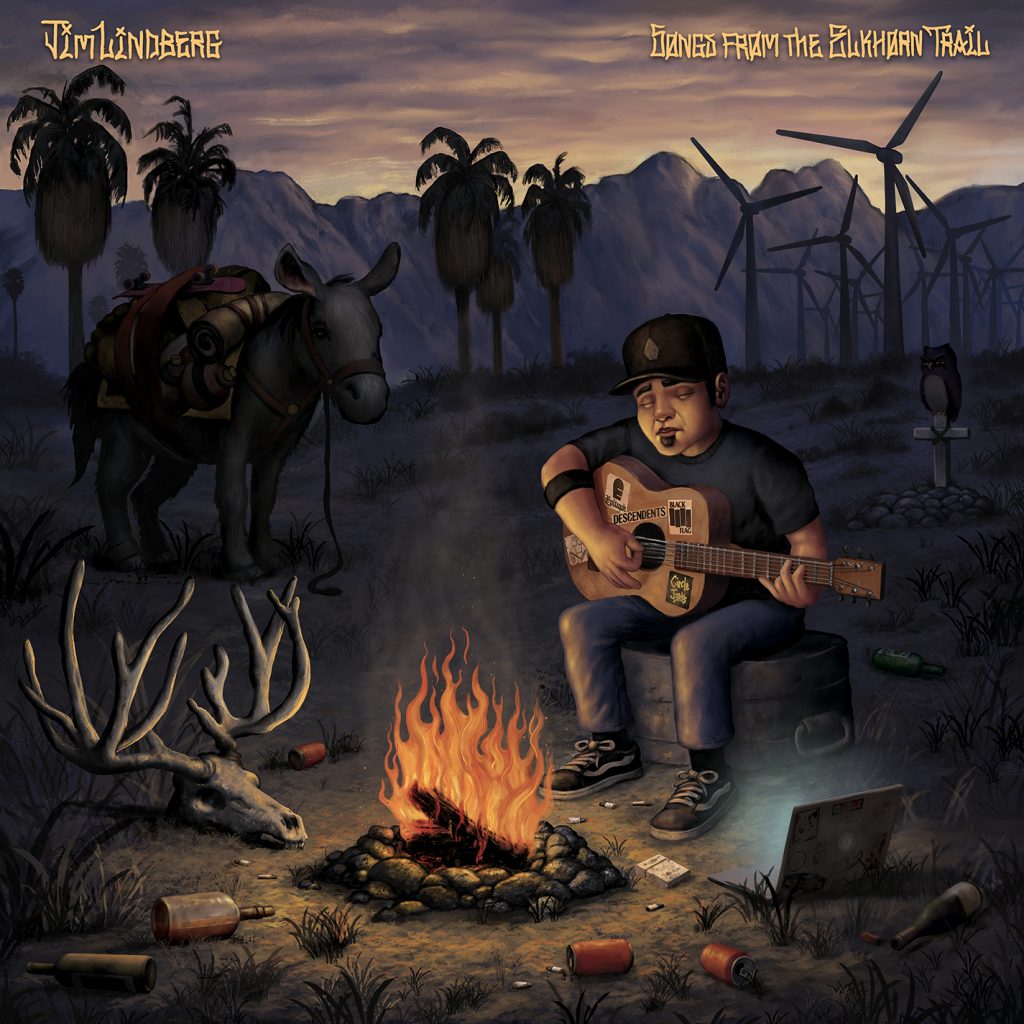 One mantra to live by in life is to “Never judge a book by its cover”, so glad I did with this one as I’ve never really been a fan when it comes to cartoon style album covers. Cartoon might be harsh, more hand drawn but you get my point. Luckily for me, beauty is more than skin deep and if first impressions are to go by, then Jim Linberg’s first song shows he’s on solid ground with this solo album “Songs from the Elkhorn Trail”.

The opener, “Palm of your hand”, is very accessible coming from any pre-conception you have of American punk or it’s disseminated offshoots. There’s a lighter feel, stripped back almost but has a feel good factor about it. An atypical chorus endears you to the song and draws you in. Music aside, Jim has some real gravity in his lyrics and once you scratch the surface, it’s easy to identify with what he is relating throughout the album.

As the acoustic guitar rips in at the start of “I feel like the sun”, this is more reflective of what my preconception was. The album may have been inspired by the passing of his father and spurred Jim onto make an album to express himself. “You’re not alone”, an upbeat song musically and has an uplifting message of hope for those people living in compromising lives but decide to break out from oppression. The delivery of the songs on the album is testament to the artists involved, namely, David Hidalgo Jr. (Social Distortion) on drums, Joe Gittleman (The Mighty, Mighty BossToneS) on bass, and Marc Orrell (The Dropkick Murphy’s, The Walker Roaders) on guitar. The album was produced and mixed by Tedd Hutt (Gaslight Anthem, Lucero, Dropkick Murphy’s) so the production is another highlight for the overall experience. As Jim swings between vitriol and introspection, there’s something for everyone in this album. “Not one of them” certainly leaves you in no doubt that Jim has his opinion of fake friends. Whether he draws inspiration from his life experiences or it’s pure social commentary, Jim has a way of getting a direct message across with no lack of transparency. It’s not all forthright observations and the reflective songs are almost heartbreaking at times. “Don’t lay me down” brings a melancholy feel to the album and in a similar way, “It’s only” is delivered in the same vain. The mix of songs and the track arrangement almost reflect how life is a rollercoaster of up and downs. There is a campfire feel to some of the songs and the odd rebel rouser but for the most part, the songs are empathic and the final track “Long way to go” leaves you feeling good about the whole album. There’s nothing ground breaking but it’s a great mission statement and a milestone for Jim Linberg to add to his record of achievements, of which, I’m sure his father would be proud of.