Forty shades of The Monochrome Set 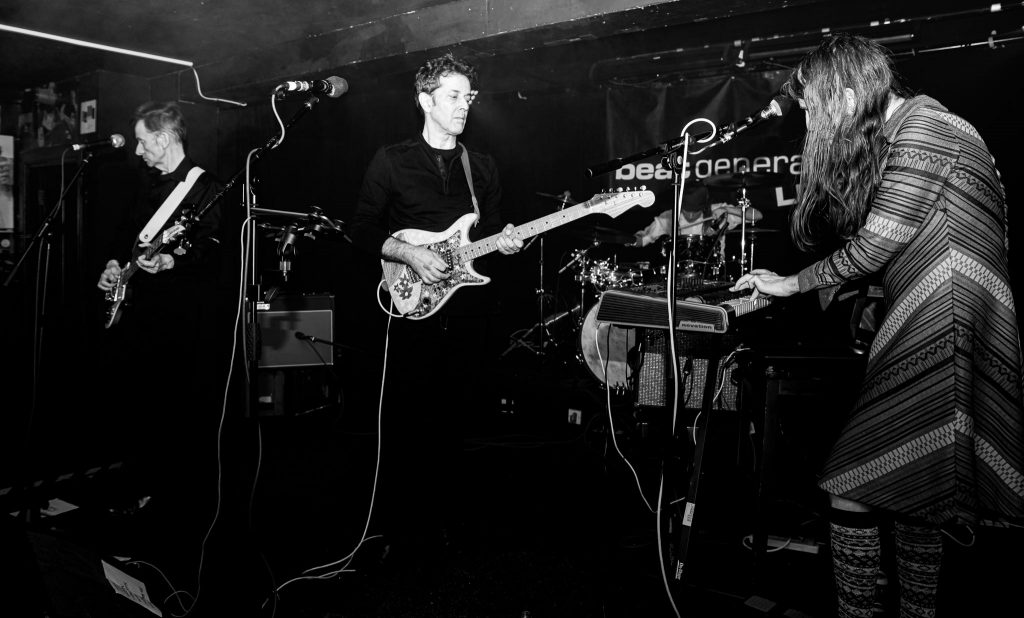 Leap years are a rare but regular occurrence and can be somewhat special. It can be true for some special gigs but you never know when they will come along. It had been 35 years since The Monochrome Set had graced Dundee with their presence and they did so with two great support bands. Formed in ’78 but it was 1980 before the seminal album “Strange Boutique”was released, so a 40th anniversary of that great album was very welcomed by those fortunate enough to attend one of the tour dates. The band have not sat on their laurels though and have released 6 albums since their reformation 10 years ago.

A second night for the influential Edinburgh band and by all accounts, they saved their best ’til last. After they eased into their set with a blues style number “Lost and Found”, they played one of their regular set favourites “Train”. The twin guitars worked well as the band ramped up their 70’s influenced post-punk/pop. “Make Believe”was up next, and an early set highlight, “It Takes One to Know One”. There was some seriously good lyrical content weaved throughout their set and the songs “Eyes are the Window to the Soul”proved this.  After “Another World”, the band played the title track to their recent third album of the the same name “Heightened Senses”. There had been some great lead guitar work throughout the night and it culminated with “What’s It All About”. The four piece were an ideal start to the evening and with the release of a new album and an E.P. it bodes well for the future.

Local favourites Stoor took to the stage and were given a warm welcome. It had been 2 years since I’d seen the band live and they wasted no time launching into their performance. The bands latest 2019 kickstarter funded album “Fleam” provided two tracks namely “Unlike Them”and “Chivers”. Another band firmly steeped in post-punk, flip between austere dark sounds and playful pop tunes at their beck and call. The band are no stranger to the odd instrumental and “Tungsten Rungs”a ‘B’ side from 1998 got it’s regular outing. The band finished off a solid performance of driving drum and bass rhythms with great classic edgy guitar work on their final track “Sure Beats Me”off their first self titled album. Another instrumental which wouldn’t be out of place on a Tarantino movie. Ever present and a willing inclusion onto any bill, Stoor continue to build their fan base and they cemented their popularity with a great support slot.

With very little fuss, the band breezed on to stage like they were playing for friends. I first saw The Monochrome Set in Dundee in 1982 and it was one of the first bands I took pictures of. Bid made reference to the last time the band played at Fat Sams in Dundee in 1985 and there were a few voices from the crowd raise a cheer when he did so. There was no time for nostalgia as the first song was from one of their recent albums released in 2018. “I Feel Fine”set the tone for the evening as their newer material was prevalent throughout.  One of their early tunes “The Jet Set Junta”, was up next, originally released on their 3rd album and title track from an E.P. of the same name. There’s a classic authenticity to the bands sound as the tell tale Rickenbaker bass and rich lush keyboards fill out the precious guitar tone. It doesn’t get an earlier than the next song as “Alphaville” their first release raised a big cheer from the crowd. The mix of old and new brings on “I Can’t Sleep” from their latest 2019 album Fabula Mendax. The new album gets an airing a few times amongst a mix of some older favourites. The 2012-2019 material is played throughout the set but it’s the old favourites from that iconic first album that stir the audience. “Love Goes Down the Drain” and “The Monochrome Set” received much deserved plaudits from the crowd. Andy Warren (Bass) remained poker faced for most of the night but he did break into a wry smile every now and then as the band playfully reproduced their recorded material. The band refused to leave the stage at the end of their set and played on for another couple of songs including “He’s Frank” which was shouted out throughout the night and finally played as a treat to the hard-core fans sporting the bands T shirts.

The Monochrome Set will continue to gig throughout 2020 and will tour The USA and Canada.