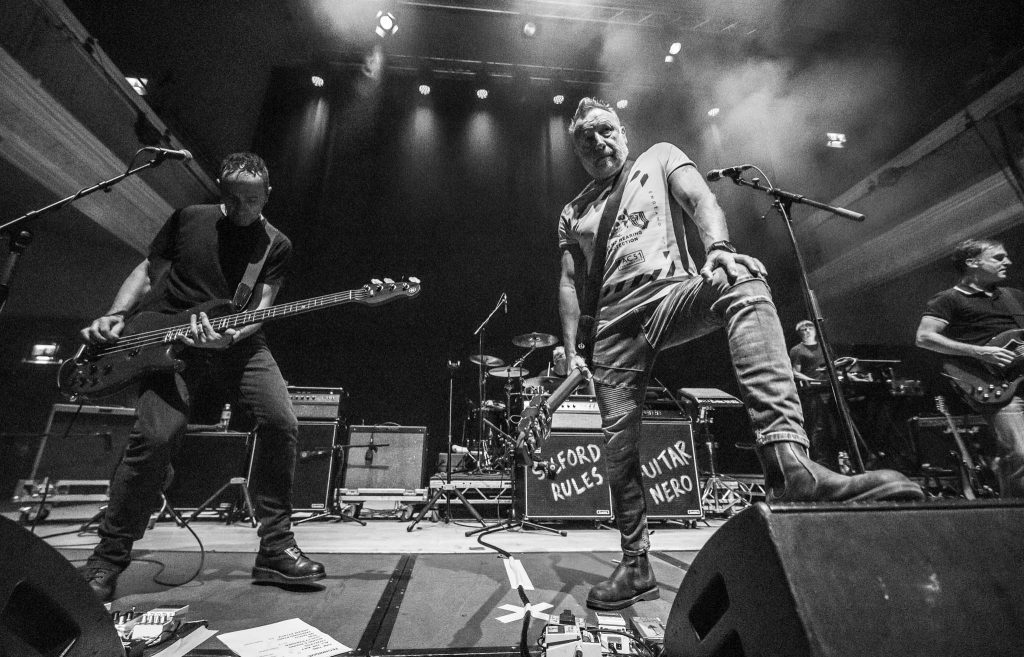 Peter Hook brought his latest tour back to Edinburgh. With memories of a disastrous gig at the playhouse still fresh in his mind, he wasn’t concerned about being bottled off on this tour. The ill fated New Order gig was exorcised by the performance by Peter Hook and the Light.The audience, which ranged between 20yr and 60 yr old fans, were captived by Peter Hook as he commanded the stage moving from side to side and at times, standing on the edge of the stage launching his bass towards the crowd.

The 1989 album Technique and the 1993 album Republic were played in their entirety. The obligatory opening Joy Division songs were eagerly awaited and captivated the fans on the barrier. “Exercise One” kicked off the short set of six songs. The song’s bleak harsh look at life still reverberates even today. The set finished with a blistering version of “She’s Lost Control” and an extended version of “Shadowplay”. The band left the stage for a few minutes just to give an air gap to the New Order material.

With Peter Hook’s dream of playing in a “rock band” still in progress, his drive and passion positively affected the entire performance. Stark contrast to the Joy Division set, the opening track “Fine Time” from Technique demonstrated how far removed the New Order material had come in the ten years since Joy Division came to an end. The electronic drums and sequenced synth’s battled with Hooky’s iconic six string Shergold bass. David Potts (guitar/vocal) voice was surprisingly close to that of Bernard Sumner. The entire album was faithfully reproduced and with some real venom. It became increasingly evident that the bulk of the crowd were biased towards the New Order material. With a sublime version of “Dream Attack” the band took their leave from the stage for a second time.

The band returned to play through the seminal #1 UK Chart Topping album “Republic”. “Regret” kicked off the third set of the night. David Potts provided an authentic feel to the performance. His familiar, voice having sung in one of the offshoot bands, Monaco, formed between “Hooky” and “Pottsy” gave real credence to the overall sound. The hits kept coming with “World”. Having three vocal harmonies worked out really well as Yves Altana provided backing vocals as well as playing bass. The drumming from Paul Kehoe gave a huge overall sound in the mix as it supplemented the electronic sequences. The packed Queens Hall was a sea of bodies and moved in one motion for the entire set. As “Avalanche” faded in the mix, the band left the stage for the third time but it wouldn’t be long before they returned for a well deserved encore. 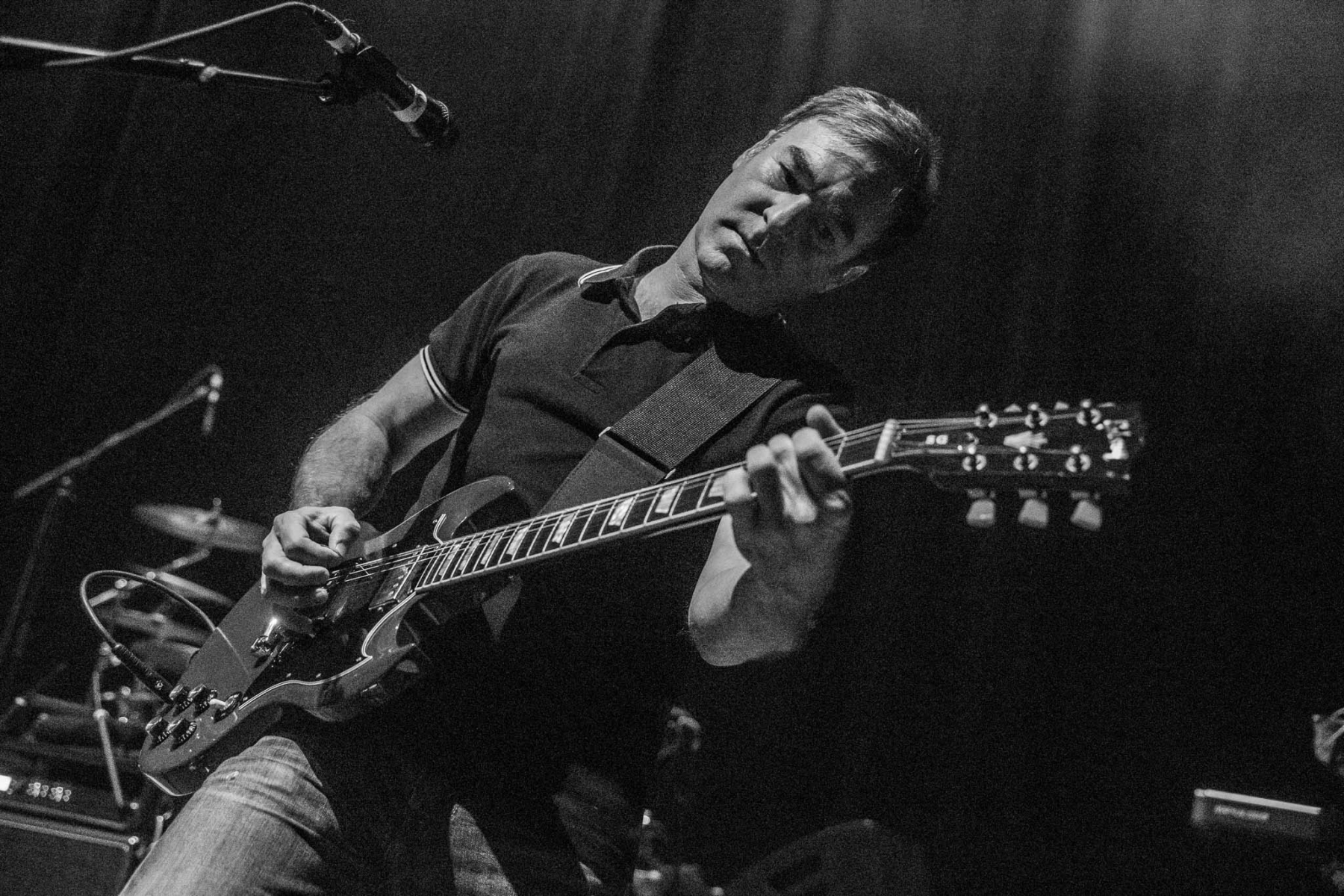 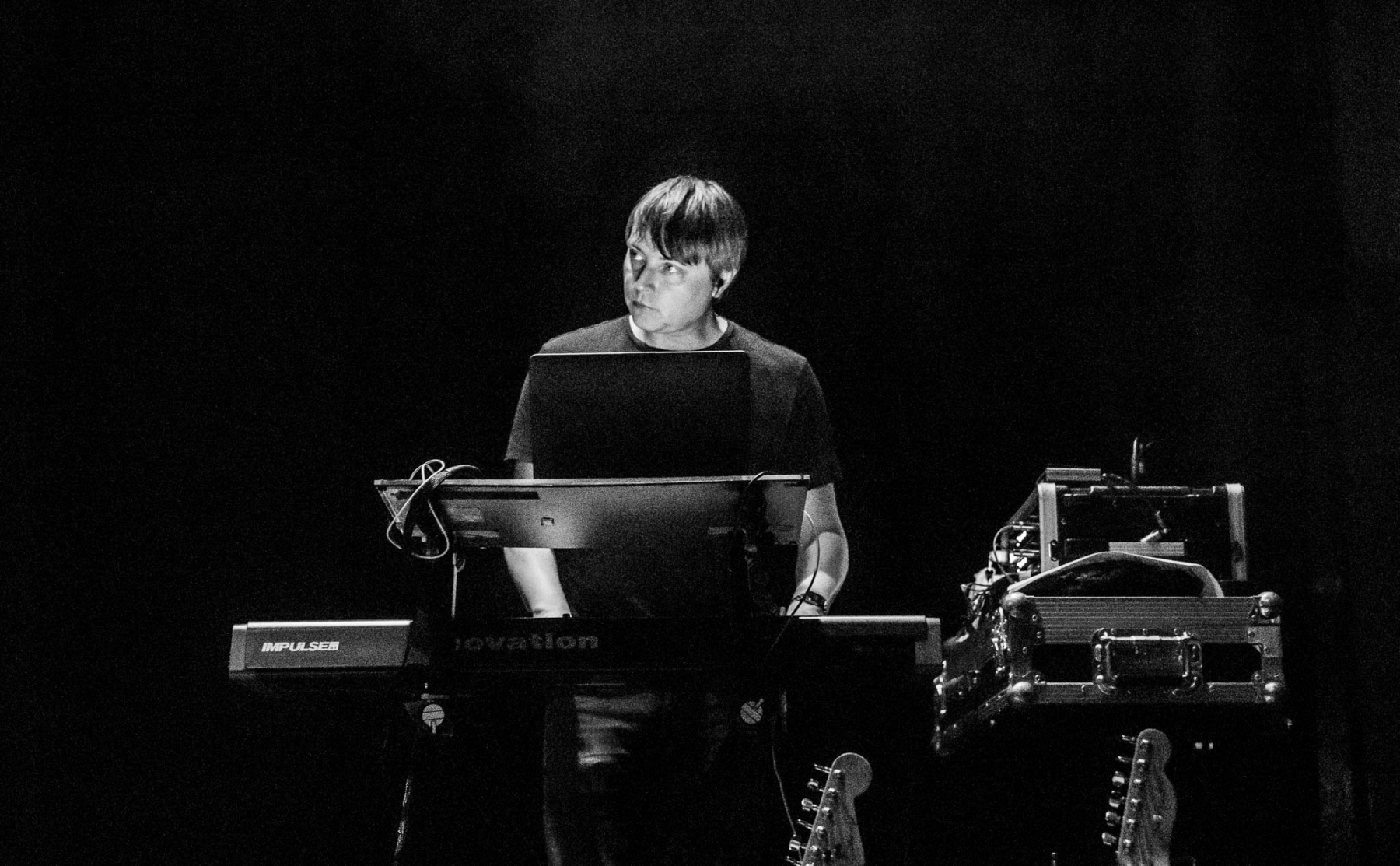 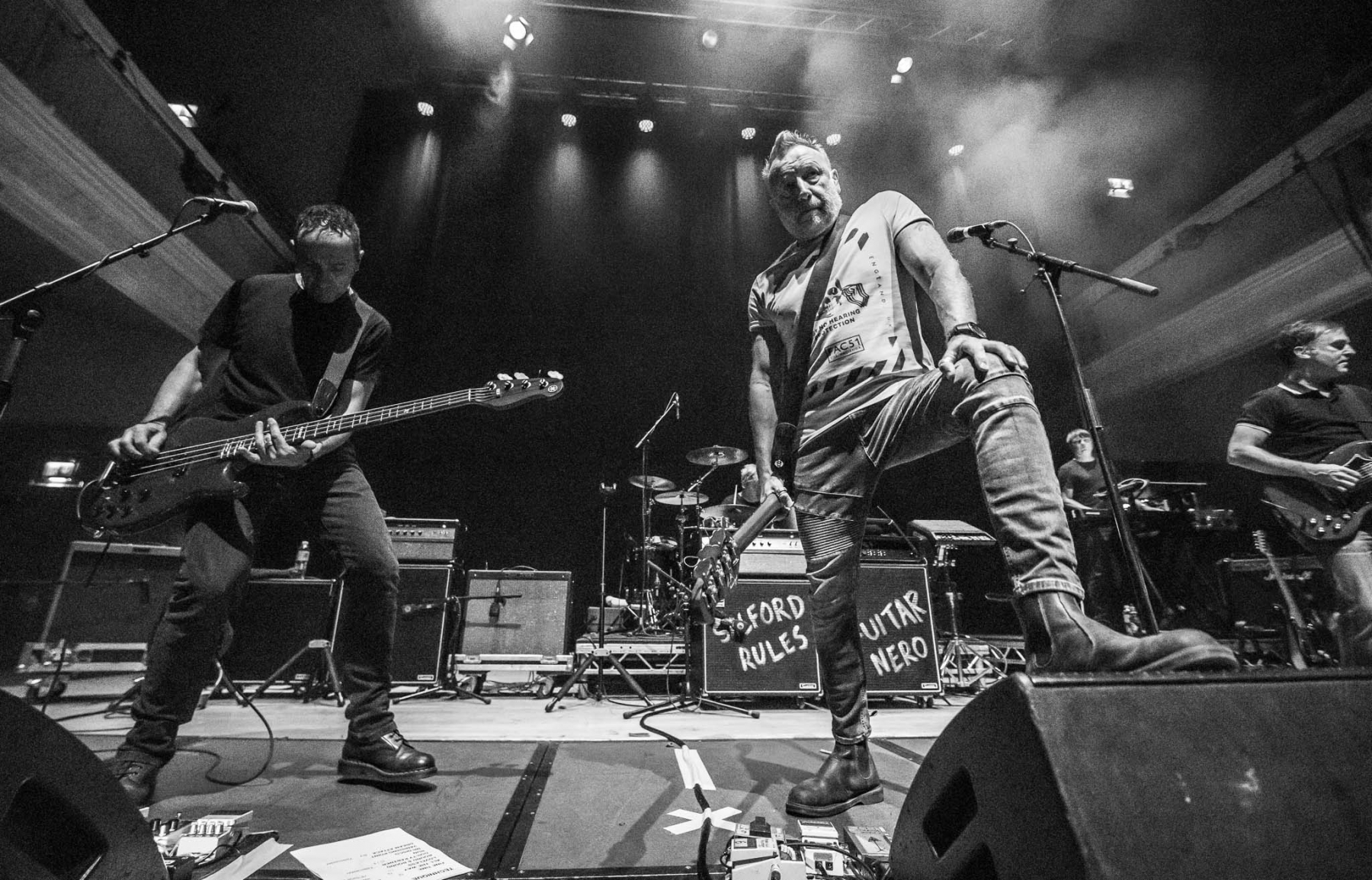 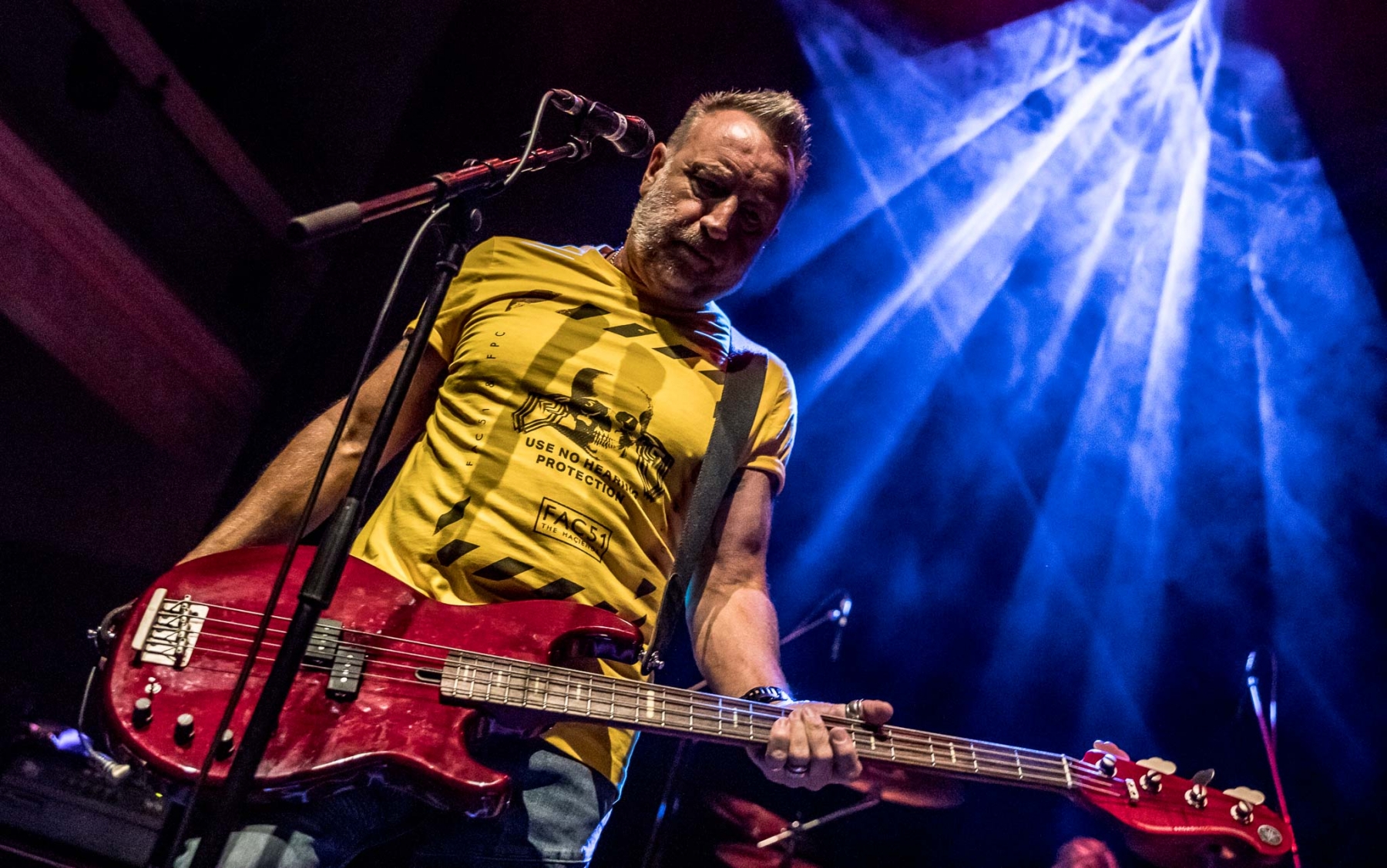 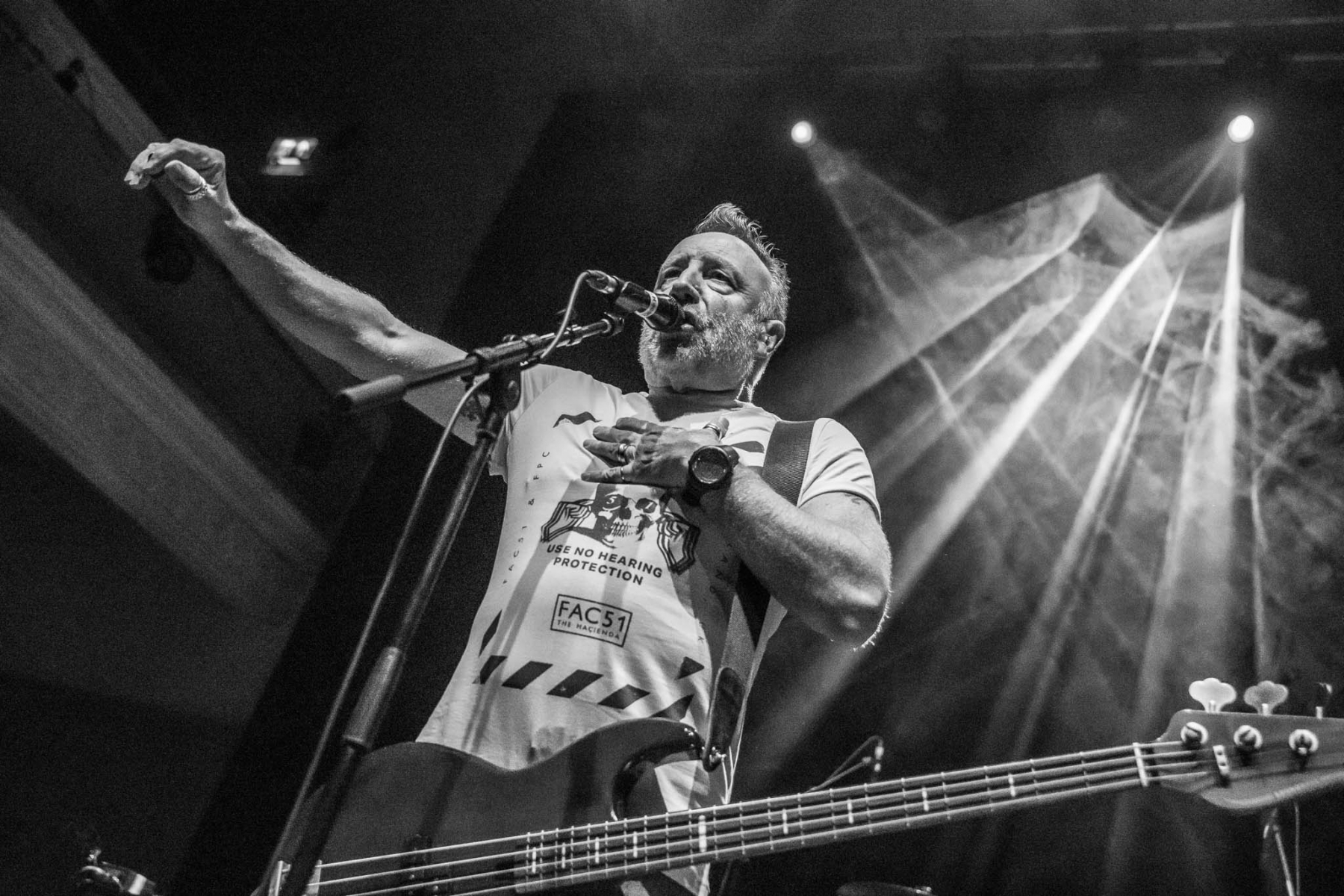 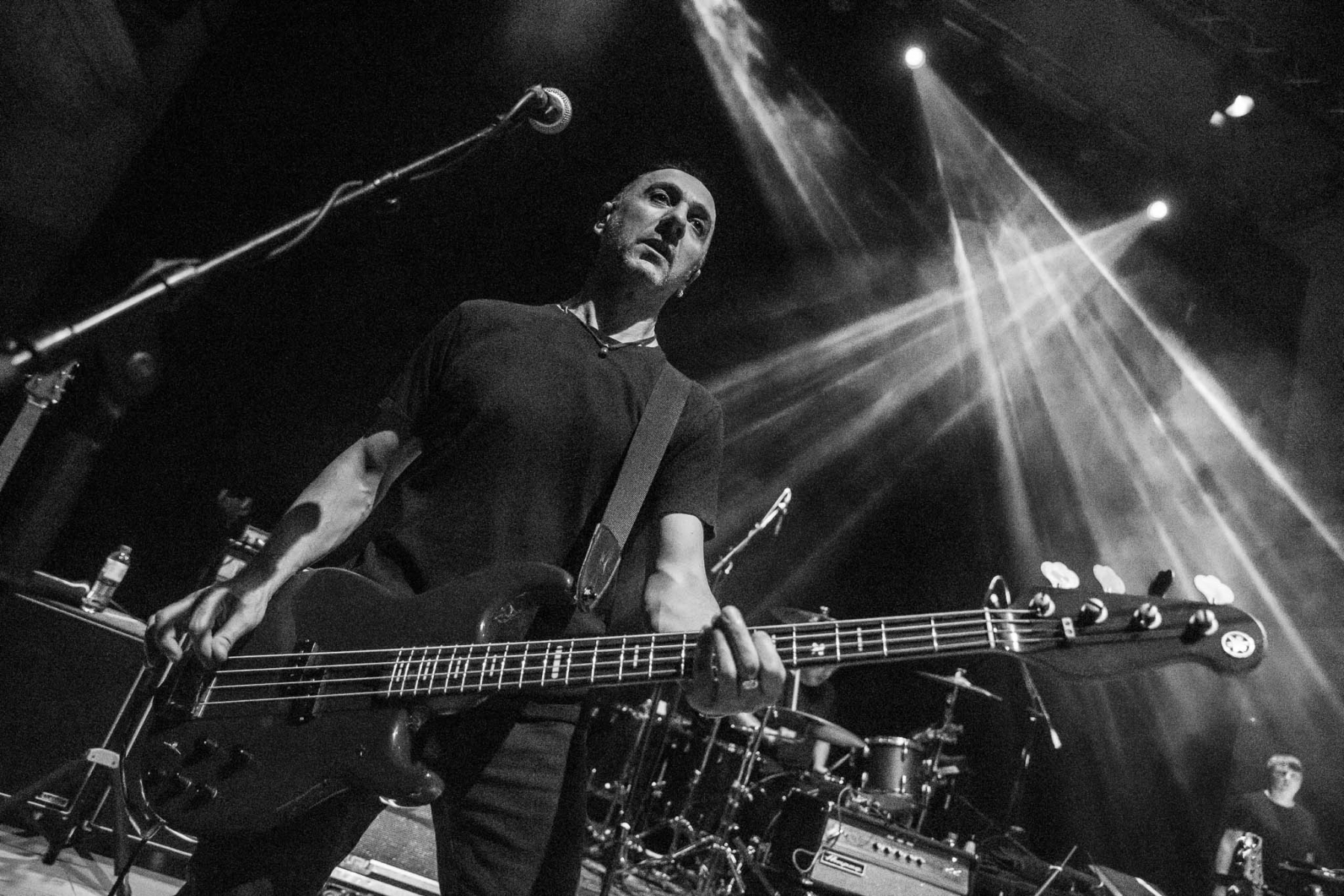 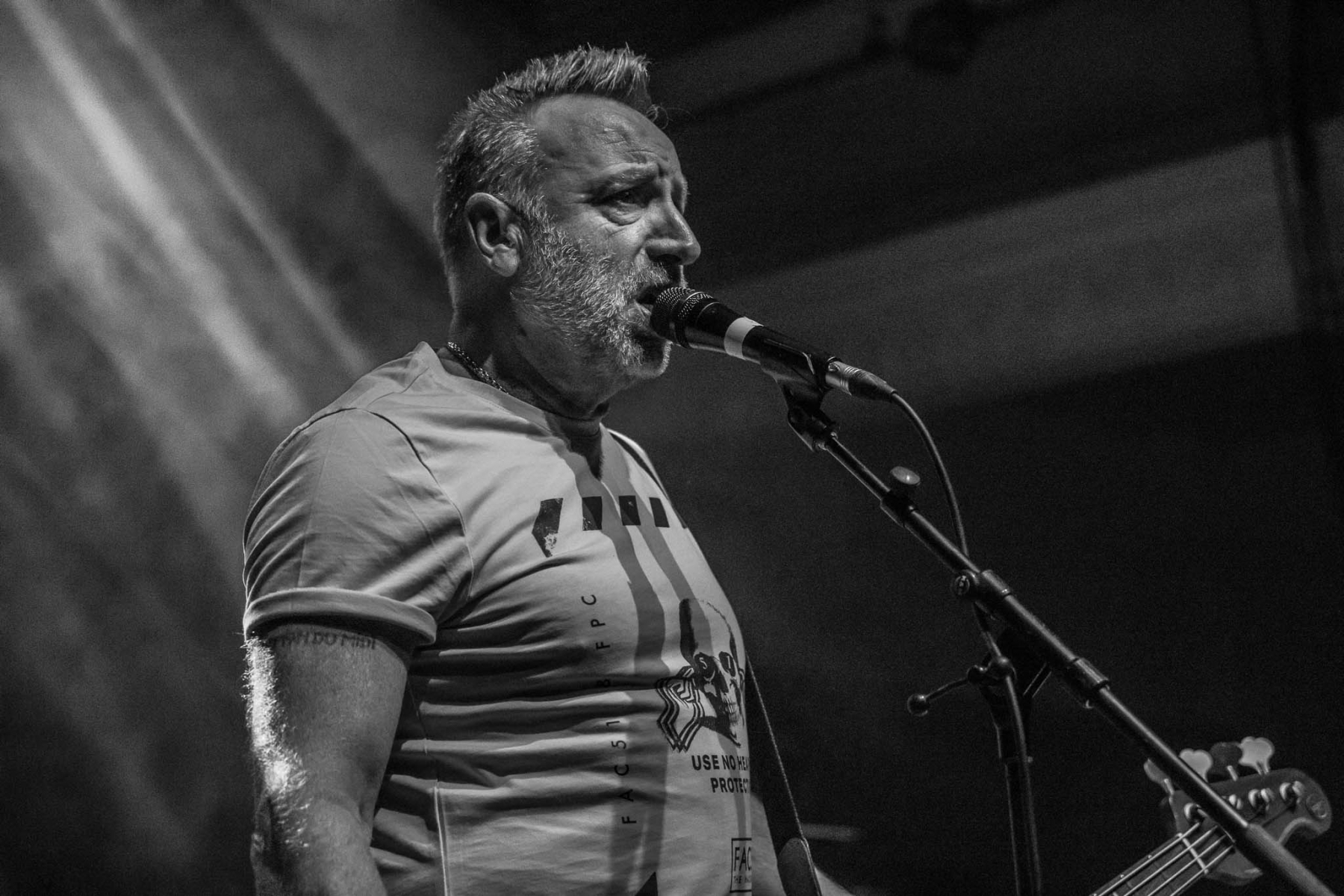 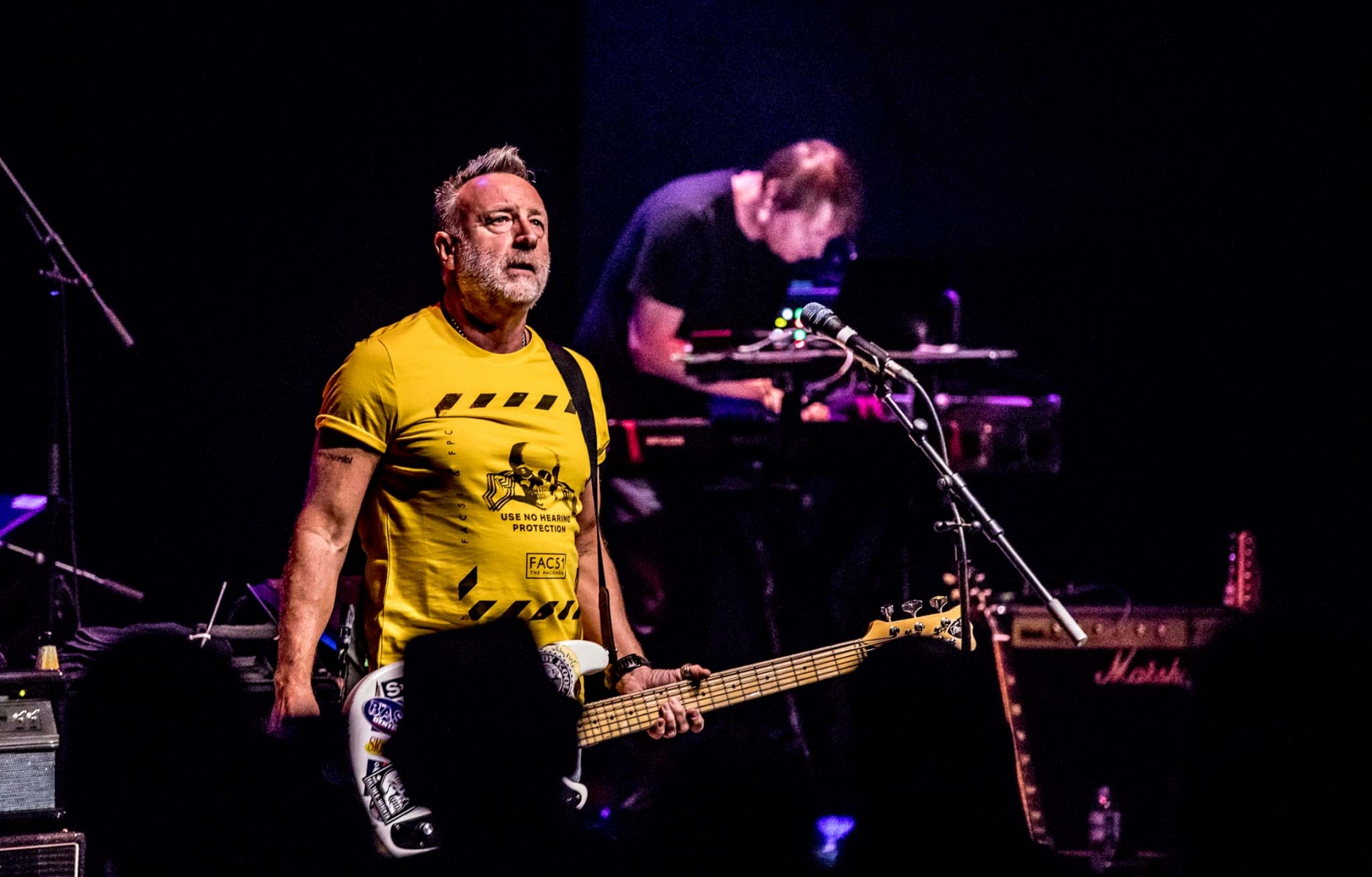 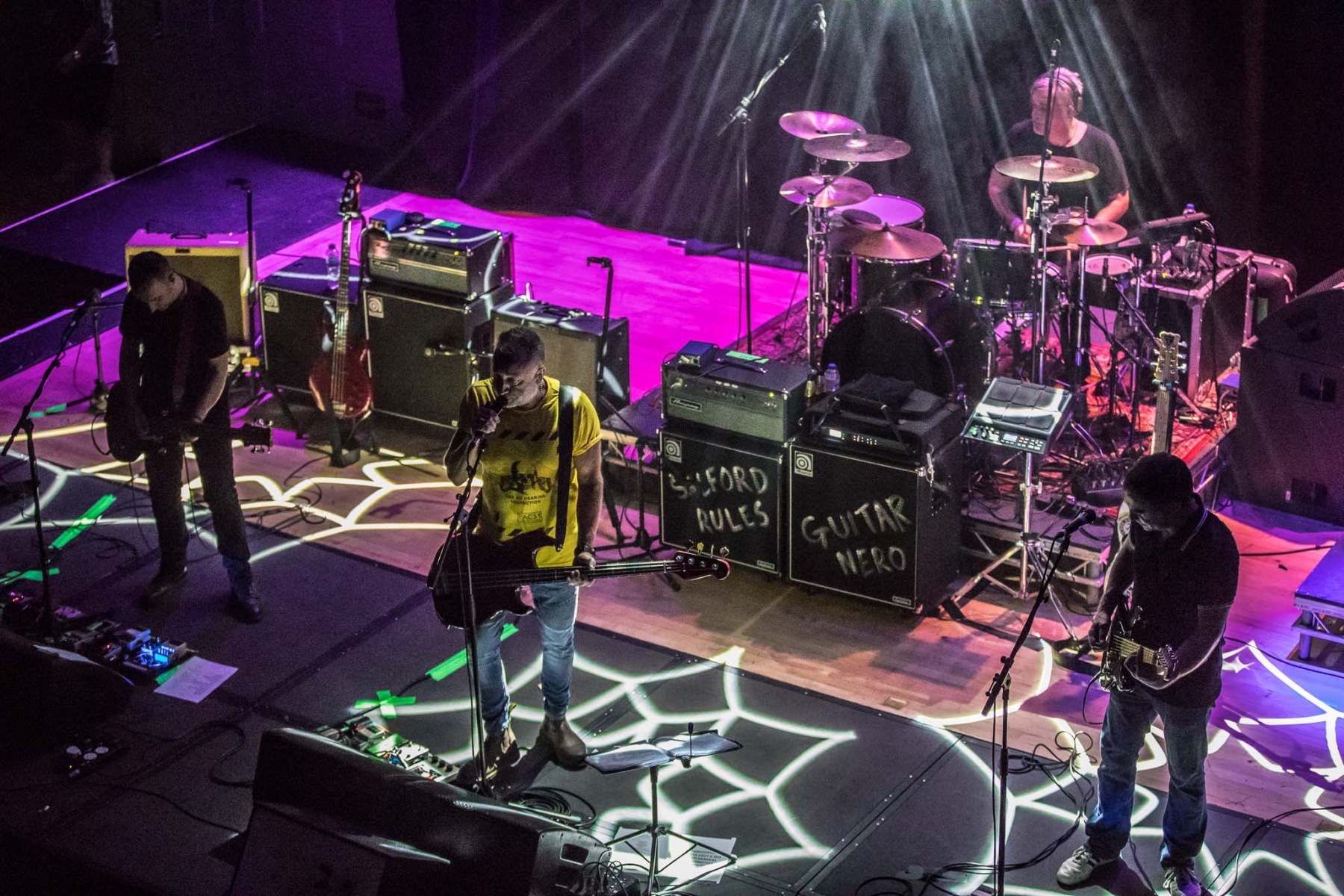 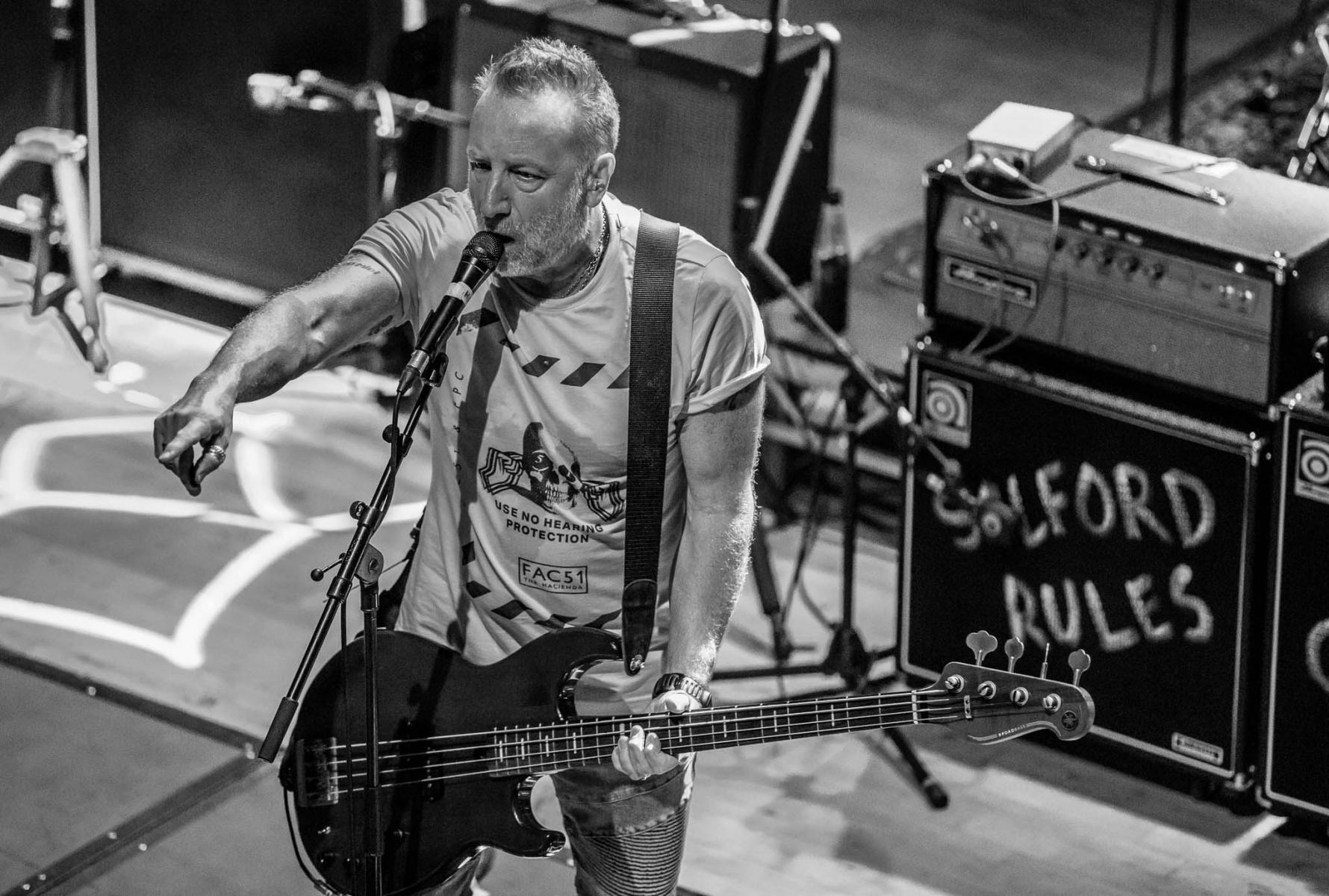 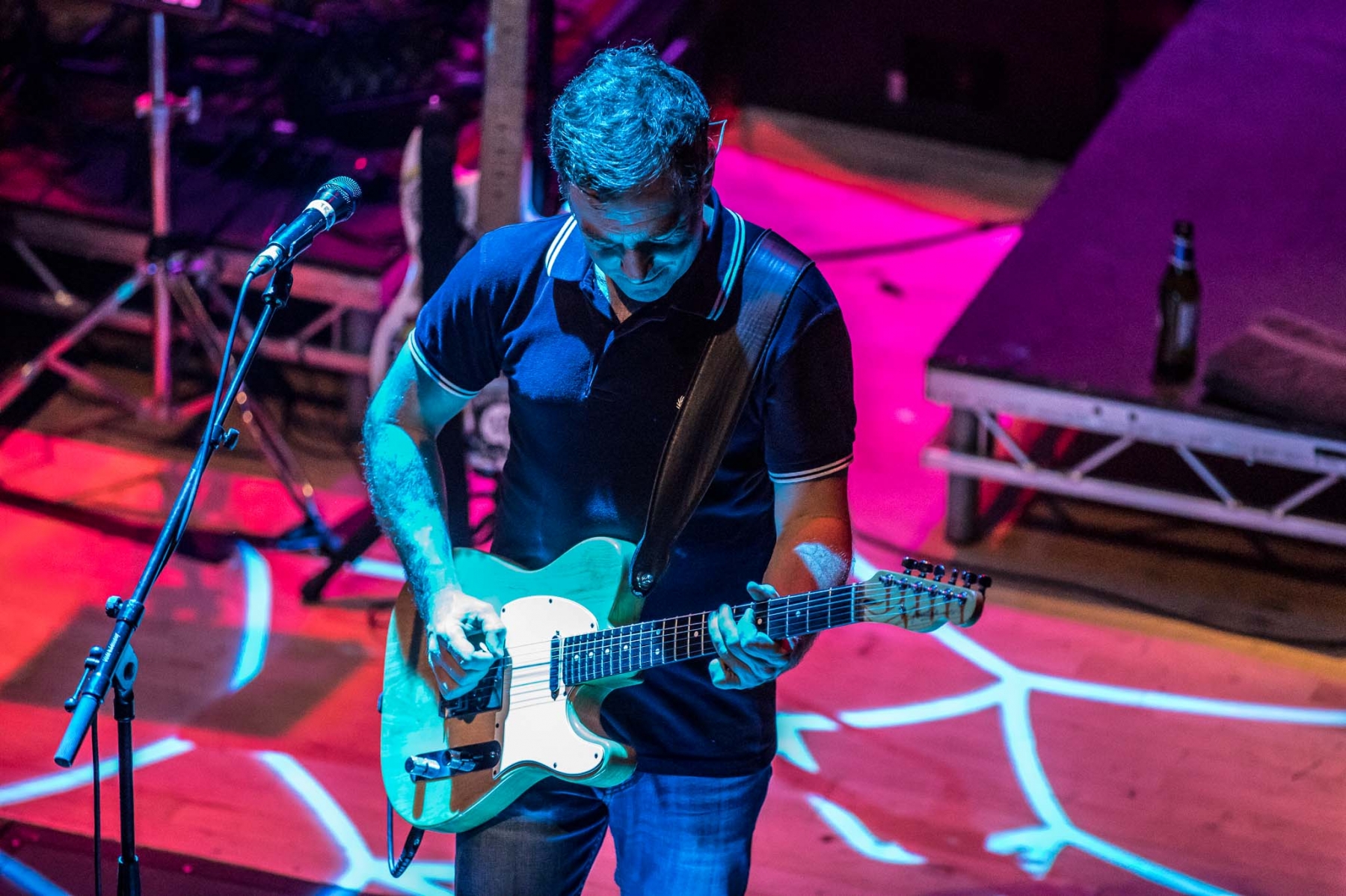 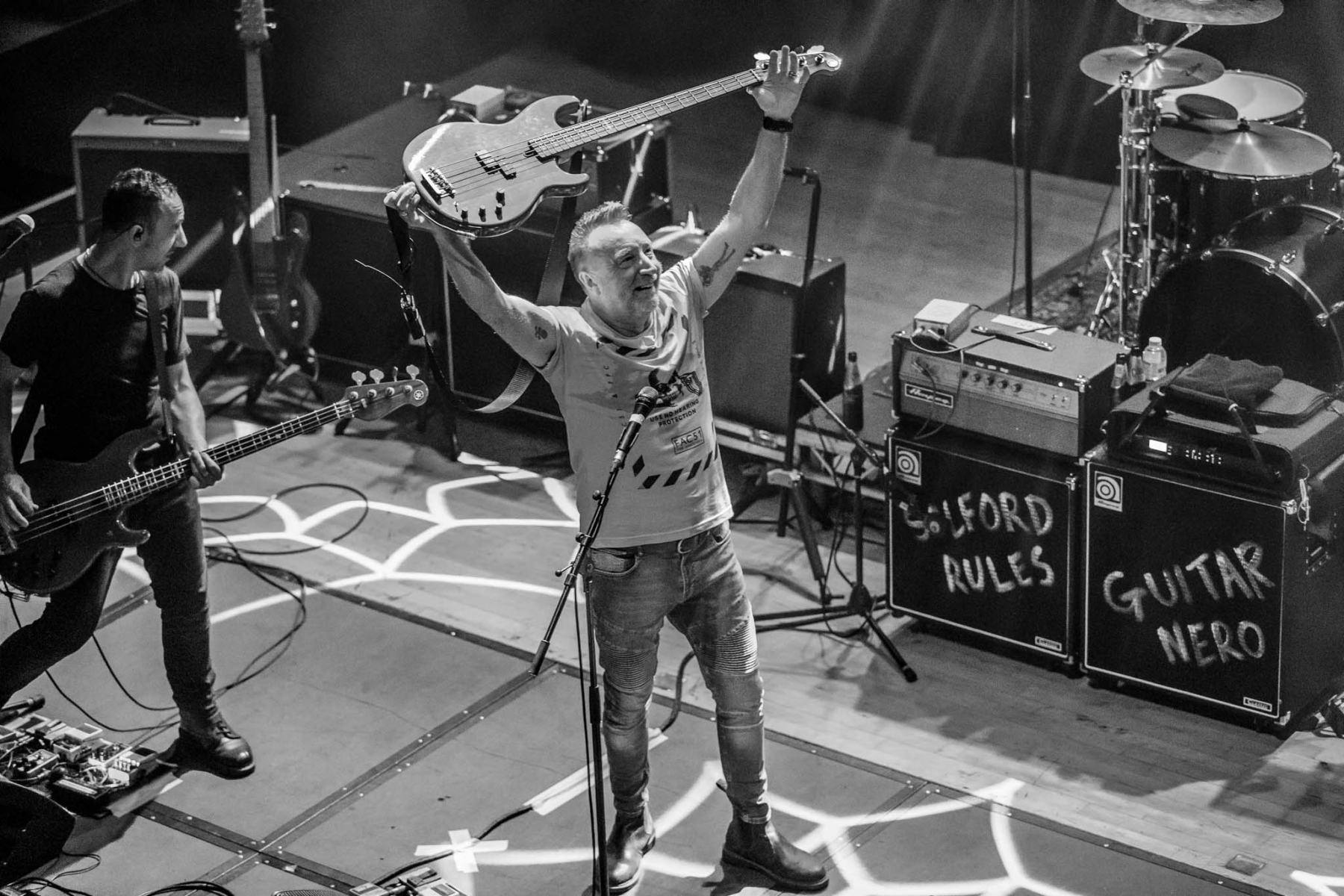 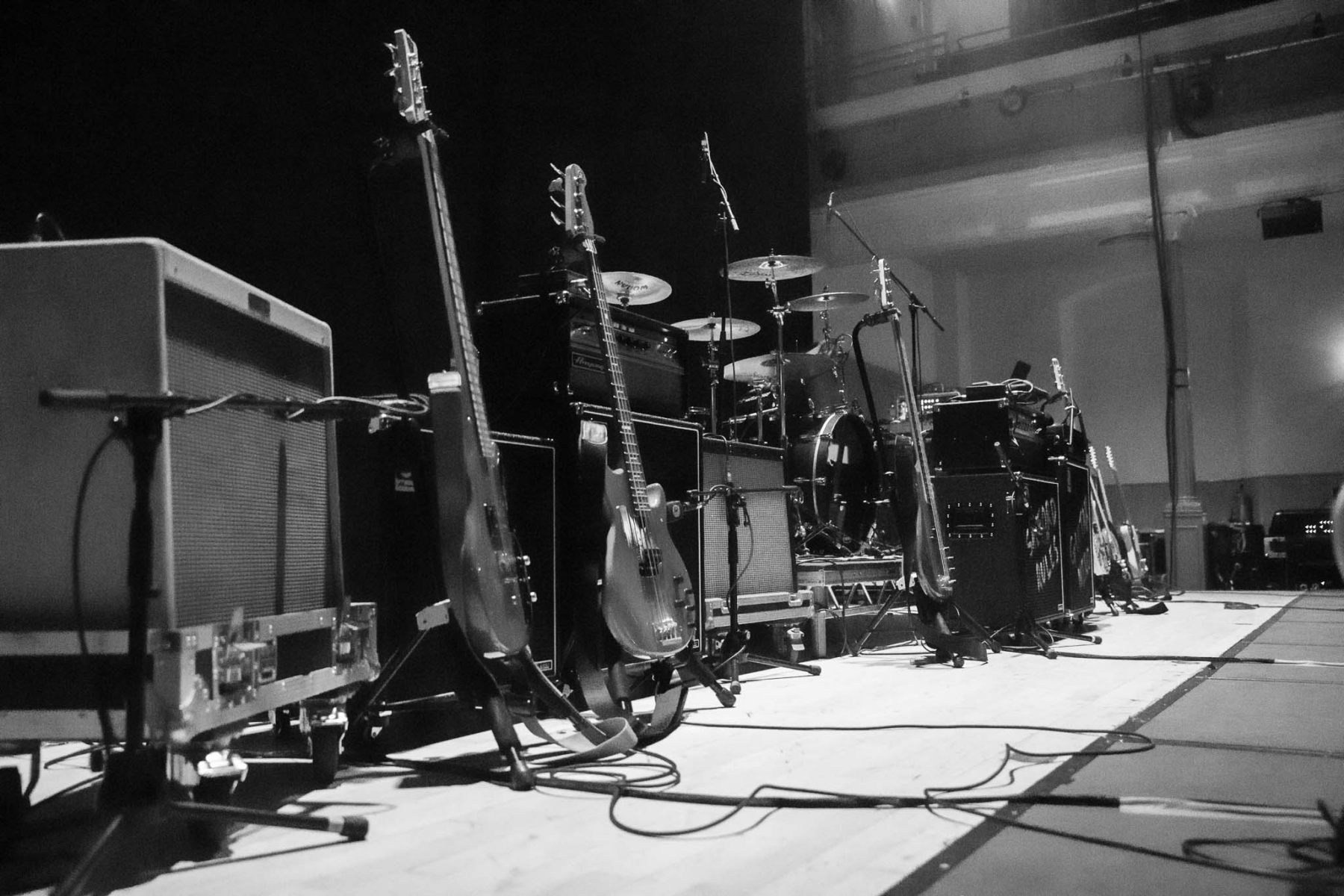 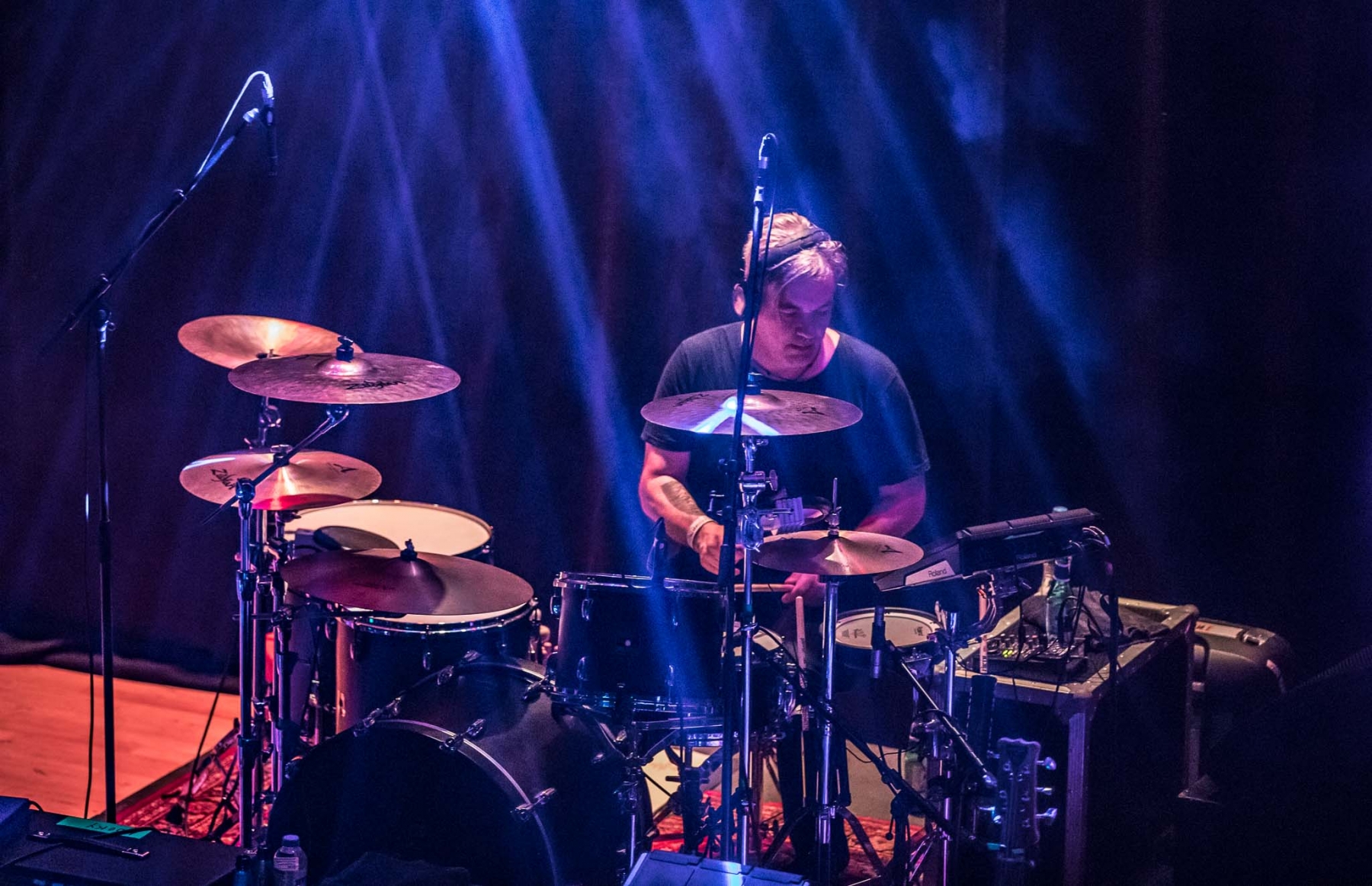 The unmistakable beat of “Blue Monday” started a phenomenal four song encore. Behind the keyboard and synth rack Martin Rebelski hit the backing track to one of the most recognisable songs in musical history. The twin Shergold basses of Hooky and Yves were a sight to behold and the audience were by now in full flow as they joined in with the memorable lyrics “How does it feel, to treat me like you do……”. The singalong continued with “Temptation” and the crowd were up down and turned around until “Ceremony” had them worked up into a frenzy. The crossover song between Joy Division and New Order unleashed something inside everyone in the audience. It was almost a cathartic experience for the band and the audience as they subliminally celebrated the best parts of both bands. No surprise what the final song of the night would be. “Love Will Tear Us Apart” ; the energy of the previous song dissipated during the last song. It was a chance to relish the previous two hours and a bitter sweet moment realising it had come to an end. As the entire audience joined in singing the iconic chorus, the sense of elation reverberated throughout the room. As the music died away, Hooky stripped off his T shirt, wiped his sweaty face and launched the shirt high into the air. A sea of arms raised mid pack like a rugby line out.  Many of the crowd ended up rolling on the floor before one eager fan raised the yellow shirt into the air with pride.

Peter Hook and the Light continue to play a few more dates in the UK on this tour before heading over the Atlantic to Mexico, Canada and the USA where they will no doubt pack out venues where ever they play.