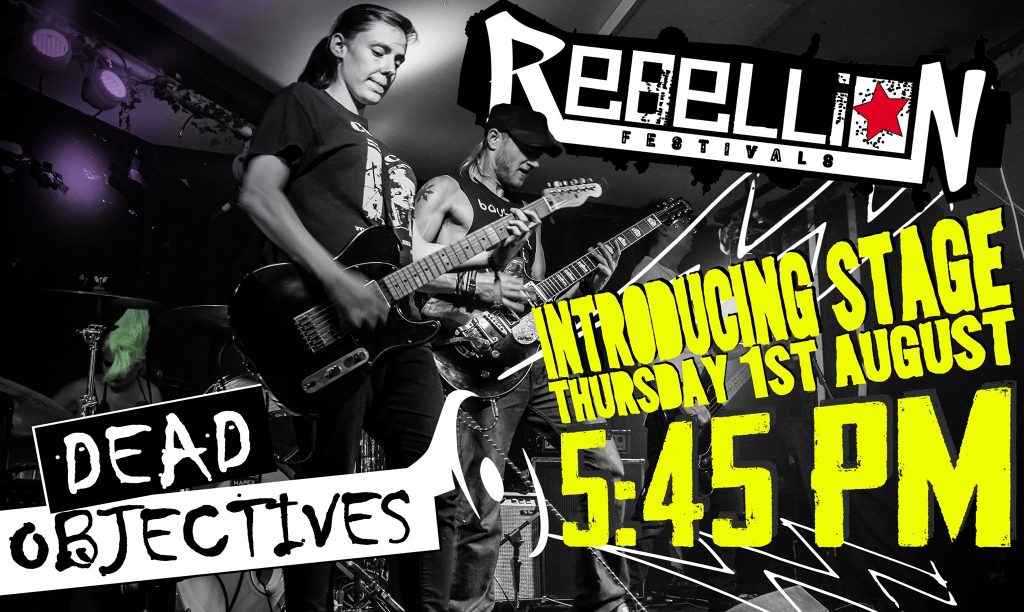 The Dead Objectives are;

Post punk meets Anarcho. A great mix of music and attitude. The Dead Objectives are on a mission to get their message out there and in your face at a venue near you. They have been clocking up the miles in the UK and Europe and doing it in true DIY style to celebrate the release of their recent album “Human Symptom”. I got this album as soon as it was released and will finally get to see the band do what they do best, perform live and what a first gig for me, Rebellion!

Q. Rebellion has been running since 1996, when did you first hear about it.

Rat: I first heard about it when it Was Holidays in The Sun. I went over for one day when Dead Kennedys, post Jello, played and then, later on, to Morecambe; witnessing the legendary Chaz and Dave performance at the Dome. I also mixed sound for Goldblade and The Rabble when the festival re-established in Blackpool.

Tim:  I think it was 2011. I was pretty young. Me and my mate went up from Wales and ever since then I always wanted to play it and am really pretty happy that we are now about to do that.

Q. What was your initial opinion of Rebellion, as a festival.

Tim: As corny as it fucking sounds, there was kind of a family atmosphere that I hadn’t felt, or found, in any other music scene. That was my first opinion.

Sally: I can go with that. There’s a definite family unity vibe.

Rat: It was the fantastic social aspect, where you can bump into lots of people you haven’t seen for years and exchange new ideas and soak up the great atmosphere.

Q. Did your opinion change at all after you went for the first time.

Tim: I’m glad they have a wide variety of bands, particularly bands that aren’t necessarily in the punk spectrum.

Rat: The general organisation of the festival is much better these days and I’ve noticed a few businesses springing up in Blackpool, such as cafes or small gig venues, on the back of the festival. Which can only be a good thing for the people of Blackpool. It’s good to know that Rebellion creates positivity.

Badja: It was bit of a pipe dream wasn’t it?

Tim: But now we are really fucking glad to be playing as we tried hard to get on there in the past couple of years.

Rat: And now all our dreams are coming true.

Q. As a band, how will you get there, where do you stay.

Badja: We have the worst, but best, hotel ever – right across the road from the artists load in. Everybody comes and uses the front steps as a social meeting point. The hotel is a fucking dive, however, it’s just the best location.

Tim: You do get beer delivered to the front steps from the bar though.

Q. Do you have any stand out memories through the years.

Tim: In relation to the band, definitely the first tour we just did through Belgium and Germany. And the time we met Youth, from Killing Joke, at Oxford services.

Rat: My favourite Rebellion memories are: chatting to Rat Scabies backstage after his, some might say, controversial audience chat. The Cravats first appearance at Rebellion and DOA and System of Hate’s set’s in 2017. Too many memories to name and some of them are a bit of a blur. Ha ha.

Q. Any bands that are a must see this year.

Rat: I think they are playing same time as us Sally.

Sally: Oops. Ha ha. Maybe not them then.

Rat: Dead Boys, Girls in Synthesis, POG, The Avengers. Me and my girlfriend really like Don Letts Reggae Sounds too.

Q. Do you spend much time at The Introducing Stage, do you check out any bands before Rebellion.

Rat: Last year, I managed to catch Spring Park, who we are playing with later this year, and, the excellent Baby Seals. I think we all try and browse a few of the Introducing Artists and pick some out to watch before we get there.

Badja: You’ve got to check out the Introducing Stage, haven’t you? Because they are the future of punk. I’m amazed that it’s the first time for bands like Poly Pickpockets and Tokyo Taboo when they’ve been making waves on the scene for a while now.

Q. As an artist, has Rebellion changed your outlook any? It’s a huge festival, more than a one off venue.

Q. Would you say Rebellion is the highlight of your year.

Dead Objectives: Rebellion is something we always look forward to going to. Seeing all our friends, meeting new people, and jumping around to fucking great bands again.

Q. How’s your year been, anything you’d like to share about what you’ve been doing band wise.

Dead Objectives: 2019 year has been great. We released our debut album, Human Symptom, in December 2018, which has been very well received by both our friends/fans and independent punk media publications like the punksite.com and Blackpool’s own punk magazine, The 8th Day.

We’ve met many new friends and supporters while touring around England, Wales, and Scotland and the mini tour of Germany was a scream. Luckily, our good friend Aqua Marina captured a bit of this on our Against the Grain video while we were playing at Wild at Heart in Berlin. You can see that on our Facebook page and YouTube.

We are chomping at the bit to record a follow up album before the end of 2019 and already organising a tour of Germany for next year, which we hope to expand into Italy, Poland, and Czech Republic if we can get some support.

Playing Rebellion is definitely a major highlight of our year and we will be following that with a series of gigs in Gateshead, Brighton, Durham, and Hereford with more dates being added all the time.

Q. Are you planning anything special for Rebellion, Single-EP-Album launch.

Dead Objectives: We plan to play one or two new tracks that nobody has heard before and we are also bringing some new merchandise along with our, much sought after, pink or yellow t shirt designs.

Q. When do you play Rebellion this year, Stage / Time Slot.

Q. Why should anyone come see your band, in a nut shell.

Dead Objectives: Our set has, basically, got something for everybody. A mix of styles, a mix of sounds, a mix of lyrical content. A band demographic of old and young, male and female, doing punk, and challenging boundaries, with some fucking pathos and energy. The way it fucking should be.