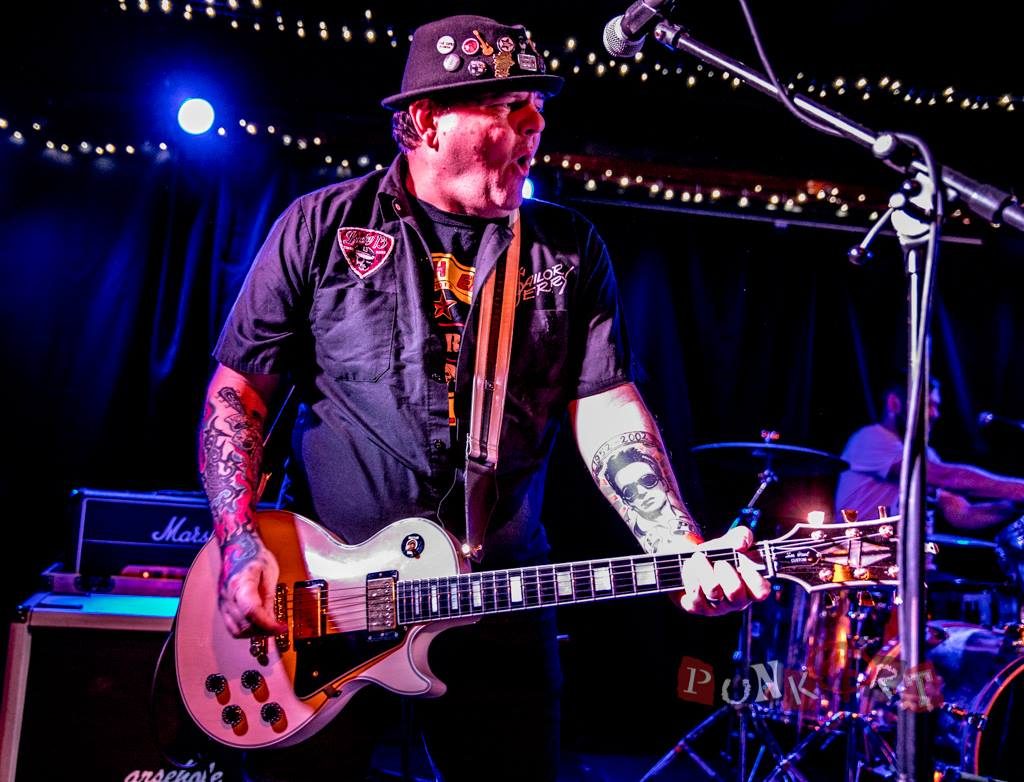 The enigmatic, effervescent guitarist for the ever popular Angelic Upstarts will be at Rebellion again this year as the band continue to spread their topical message after over 40ys. Some of the songs might be long in the tooth as far as time is concerned, but in these dismal days of social and political conflict, they remain as relevant as they were in the late 70’s. So, what about Newts, he gave us a brief insight into his historical Rebellion experience.

Q. Rebellion has been running since 1996, what’s your first memory of those early years?

I remember it being called ‘Holidays in the Sun’, then ‘Wasted’ and now ‘Rebellion’. I also remember, somewhat bitterly/regretfully, because of work commitments and a family to feed, it never falling right so I could get the time off to attend those early events.

Q. Did you ever imagine it would be such an iconic event, lasting over 20 years?

I think anything has a good chance of lasting a long time, provided it is built on solid foundations. The fact that many bands who play Rebellion, first fired up over 40 years ago, is testament to that.

Q. Is there any other festival that can match it in terms of inclusivity?

Broadly speaking I’d say yes, absolutely. Punks in general are a very welcoming and accepting bunch, I think you’ll find that’s as true at Rebellion, as it is at any other punk fest, be it a one day festival held in the back room of a pub holding 50-100 people, or at the Winter Gardens for thousands over four days.

Q. What’s your ideal festival, What would Newtfest look like?

I’d love to see all the bands who play Rebellion, take part in An Edwardian/Victorian Skifflefest. Everyone finely attired in period costume and playing their set using tea chests and other assorted gubbins. All swearing and slang must be from the era too. Marvellous.

Q. Do you have any stand out memories from all the years at Rebellion?

Japes and Capers – Police storming our hotel one year because the owner didn’t like his guests drinking in the hotel bar, despite it having a big notice saying ’24 hour Bar’. “Just because it says so doesn’t mean you have to” was his response!  Then a few years later we had a bipolar hotel owner, who made our stay somewhat exotic in a passive/aggressive way but the main stand out memories are, as always, the people who go. Every year it’s the constant flow of beautiful diamonds, who are the Rebellion festival goers, who are the ones who create the standout memories and they never fail to deliver.

Love em both and I’m comfortable living on the road. I’m a musician and playing live is one of the many privileges being an artist/band affords you. I’m just as happy playing in a small venue as I am performing at a big outdoor festival, there is no sliding scale of enjoyment. I love music and I love playing music. Have guitar, will travel.

Q. Any bands that are a must see this year. Who’s on your radar?

Out of the established bands, I really wanted to see ‘The Stranglers’ but our stage time clashes with theirs. I’m looking forward to seeing ‘Argy Bargy’ back on stage again as they’ve been away for a while, the Business event looks special too but the main one I want to catch is ‘Alvin Gibbs and the Disobedient Servants’, the new album is great, so I’m looking forward to hearing it played live. From the new bands I’m looking to check out, amongst many others, ‘Battalion Zoska’ and on Sunday, the hilariously named ‘Trigger Mcpoopshute’. I have deliberately not looked for any of their music, their band website etc, I want to go in completely blind. I mean, who the fuck goes jumpin about with a name like that? Hahah, punk as fuck man, it’s fucking marvellous.

Q. Do you spend much time at The Introducing Stage, do you check out any bands before Rebellion?

I do, yes, every day I go along and check out the introducing stage. Some I will have checked out beforehand via Soundcloud or Bandcamp, some I will not have, I like an element of unknown and to be seeing/hearing something for the very first time. You’re never too old to learn something new and watching bands you’ve never seen before very often inspires you and keeps you sharp and on your toes. It’s very organic, with new bands watching how established bands go on and vice versa.

Q. Would you say Rebellion is the highlight of your year?

Working away from home means personal family quality time, will always be the main highlight of any year for me but Rebellion, is quality time with your punk family and the embrace is just as warm, loving and unconditional.

Q. How’s your year been, anything you’d like to share about what you’ve been doing band wise?

Very busy, which is great, as a musician you want to be working. I’m currently writing for the new Upstarts album which is due out in 2020 and I am busy writing for one or two other projects too, as well as doing some engineering/production work. The Upstarts will be looking to concentrate on Europe and further afield next year, as we’ve been busier in the UK these past few years, so we’re off to play countries/cities we either haven’t played for a while or, not at all. So yeah, things are moving along steadily, which is a good feeling.

Q. Are the band planning anything special for Rebellion?

I honestly don’t know because Mensi always waits until the last moment before throwing a curve ball but what I can say, is we always concentrate on giving the best performance we can. The promoter and the punters pay good money to see the bands at Rebellion and, more importantly, if they choose to spend their time watching your set, that is a huge honour and a privilege, for which they deserve nothing less than 100% effort and respect from the band, in return.

Q. Do you have any special routine, preparation or must do before you play?

No alcohol before stage time, a fresh set of strings on guitar, write out the setlist to keep busy as the waiting to go on is the worst part, because the adrenalin starts to kick in and you’re chomping at the bit to fire up so, finding something to do helps the time pass quicker…oh aye and a quick piss before going on, this is called the ‘psychological piss’, as no matter how soon it was since you last went for a slash, even if it was just 5 minutes ago, you’ll suddenly be bursting for another, right before you go on.

Q. Is there any current band on the circuit that you’d loved to tour with or even play with?

Would love to tour with the Wildhearts and Idles, think that would be some tuneful chaos right there and the live shows would be insane.

Haha, my mainstay is the ‘Popeye Doyle’ diamond crown porkpie but if I ever lost it, then I have a vast collection as back up, my good man. There’s everything from Bowlers and Derbys, to Deerstalkers and Fez’s. I do like a good hat and it goes without saying that it simply must be perched at a jaunty angle. Chin chin!!