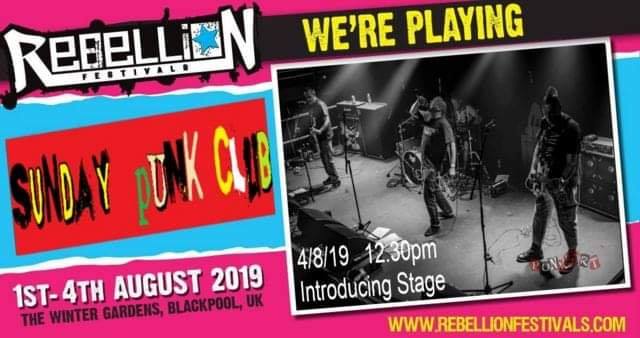 No nonsense straight up punk rockers get the call up to Rebellion’s introducing stage. A late replacement for fellow Scots pals Crimedesk who had to pull out due to illness, it’s a welcome addition to the bill for these guys who have steadily built up a solid set of hard core punk tunes.

Q. What was your initial opinion of Rebellion, as a festival.

Q. Did your opinion change at all after you went for the first time.

Yes, it was much bigger, better and friendlier than I first thought it would be .

Q. Was it always your plan to play at Rebellion.

Yes from the word go.

Q. Do you have any stand out memories through the years.

Q. Any bands that are a must see this year.

The Descendents, The Eddies, The Signal, The Professionals & DOA

Q. Do you spend much time at The Introducing Stage, do you check out any bands before Rebellion.

I pop in and out of the introducing stage. I check bands out all the time.

Q. As an artist, has Rebellion changed your outlook any? It’s a huge festival, more than a one off venue.

It has changed my outlook in that I now know its possible to get onto the line up large festivals.

Q. Would you say Rebellion is the highlight of your year.

Q. How’s your year been, anything you’d like to share about what you’ve been doing band wise.

We’ve played some superb gigs this year. We have just finished playing at the Punk on the Peninsular festival in Dunoon which was great. We are also in the middle of recording our debut album “Up the Punks”. Hopefully that will be out by the end of the year,

Q. Are you planning anything special for Rebellion, Single-EP-Album launch.

Nothing too special, just some new merch to sell.

Q. When do you play Rebellion this year, Stage / Time Slot.

We play the introducing stage on Sunday 4th at 12.30pm.

Q. Why should anyone come see your band, in a nut shell.

Because we are good old fashioned in your face hi octane punk rock band with some great songs.